Report on the Postgraduate Interdisciplinary Conference on Inclusive Growth 2014-15

The Interdisciplinary Postgraduate Student Conference was organised jointly by the departments of Sociology, Social Work, Economics and Psychology. The coordinating department for the academic year 2014-15 was the Department of Sociology. Abstracts were invited from postgraduate students from these departments in the month of November 2014 and the final papers were submitted in February 2015. A total of 95 papers were shortlisted for presentations on Tuesday, March 3, 2015.
The inaugural session started around 9.15 am at Sky View, Central Block.  Prof. Suparna Kar from the Department of Sociology welcomed the gathering. It was followed by the presentation of the concept note by Dr. Tony Sam George, Head, Department of Psychology, who also spoke about the background of the Conference and its format. The inaugural session was presided over by Dr. Anil Joseph Pinto, Registrar, Christ University. He spoke about the greater role of a University in nurturing a research culture which is interdisciplinary in nature.
The Guest of Honour for the day was Dr. Baldev Raj, Director, National Institute of Advanced Studies (NIAS), Bangalore. Dr Baldev Raj is a highly acclaimed erudite scientist who reiterated the need for intellectual honesty and integrity in academia which is rooted in values. He also reinforced the need for interdisciplinarity as well as the significance of being able to put academic research into practise. His speech reflected the importance of being the change that we want to see. 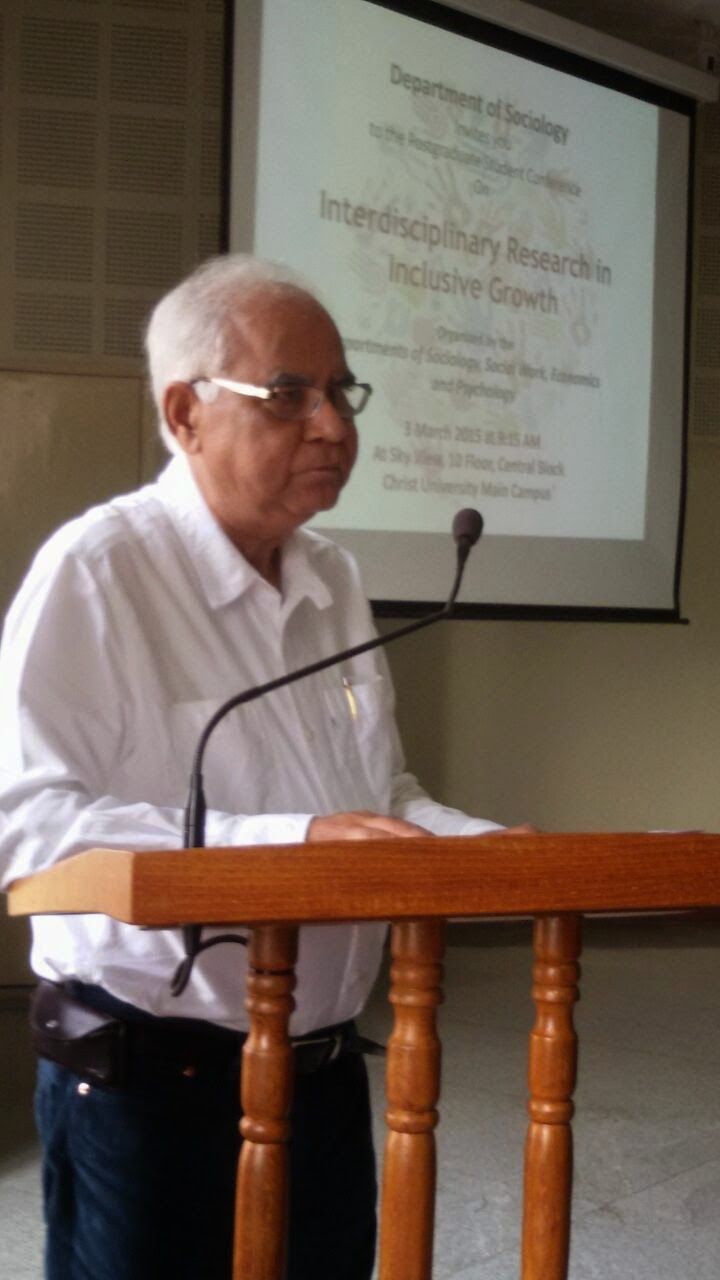 After the inaugural session the students were broken into five parallel sessions for their presentations. The broader themes were Organisational Dynamics; Issues Among Emerging Adults; Social Issues and Special Groups; Developmental Issues and; Research in Health Sector; Gender, Sexuality and Marginalisation; Economics and Market; Psychosocial Issues; Consumer-Work dynamics and Interventions and Policy. Each sessions were moderated by a faculty member and the best paper from each session was awarded a prize.
The best paper awards for each session were as follows:
1.      CS 01: Organizational Dynamics - Pradeep Gopal
2.      CS 02: Issues among emerging adults - Shagun Guha
3.      CS 03: Social issues and special groups - Sucheta Mishra
4.      CS 04: Developmental Issues - Anupama Sudesan
5.      CS 05: Research in the Health sector - Shefalika Shah
6.      CS 06: Gender, Sexuality and Marginalization - Disha Mangsuli
7.      CS 07: Economics and Market - Roshni Wani Thapa
8.      CS 08: Psychosocial Issues - Vijayapriya C V
9.      CS 09: Consumer Work Dynamics - Anupama George
10.  CS 10: Interventions and Policy - Astha Dugar
The valedictory session was held at 3 pm and was presided over by Dr. Mallika Krishnaswamy, Dean, Humanities and Social Sciences who offered the concluding remarks and gave away the prizes and certificates to the winners along with Dr Victor Paul, Associate Director, Departments of Sociology and Social Work. It was a truly enriching experience made even more memorable by the sharing of ideas and thoughts across the borders of our disciplines by the budding researchers and scholars. 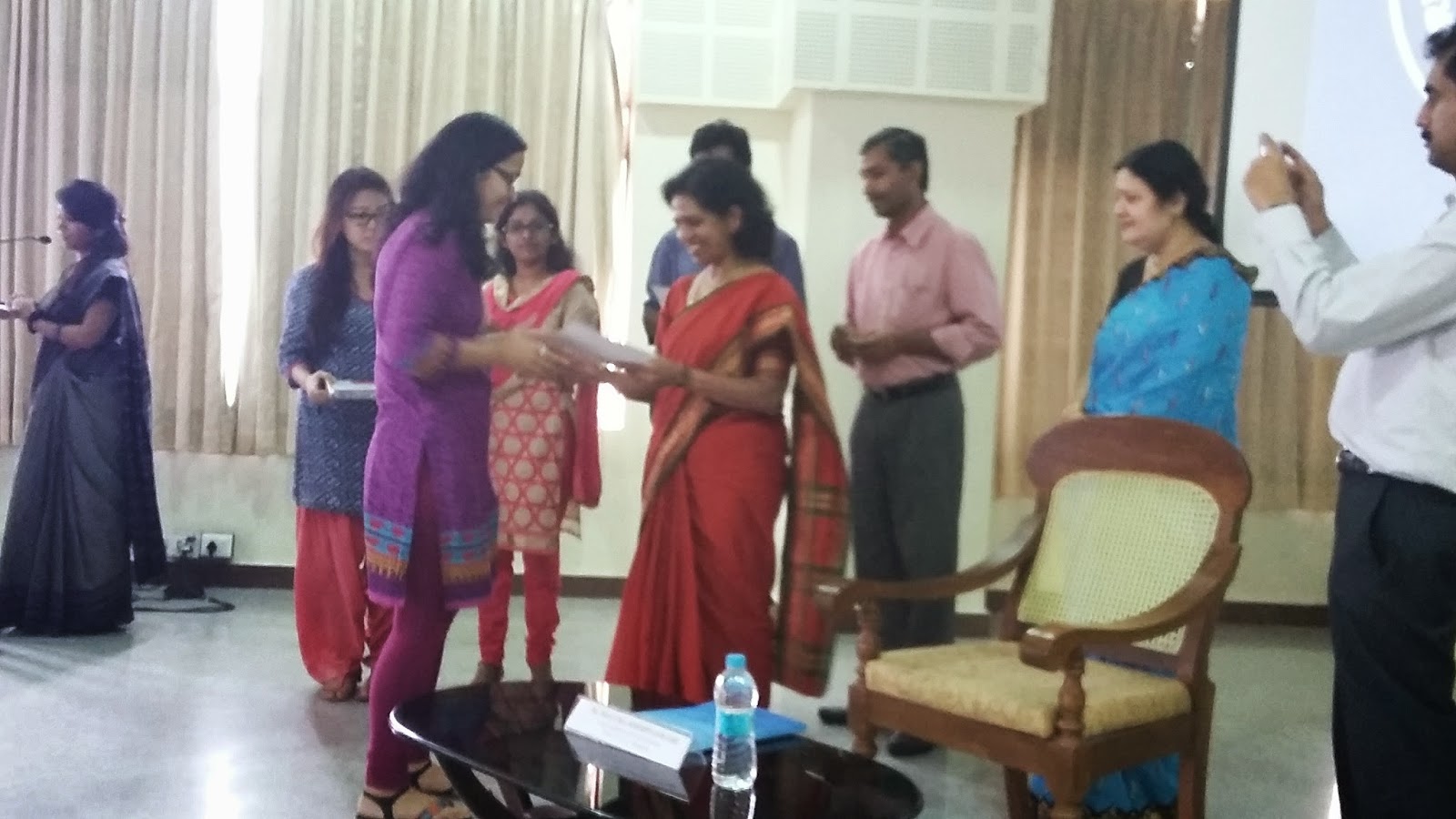 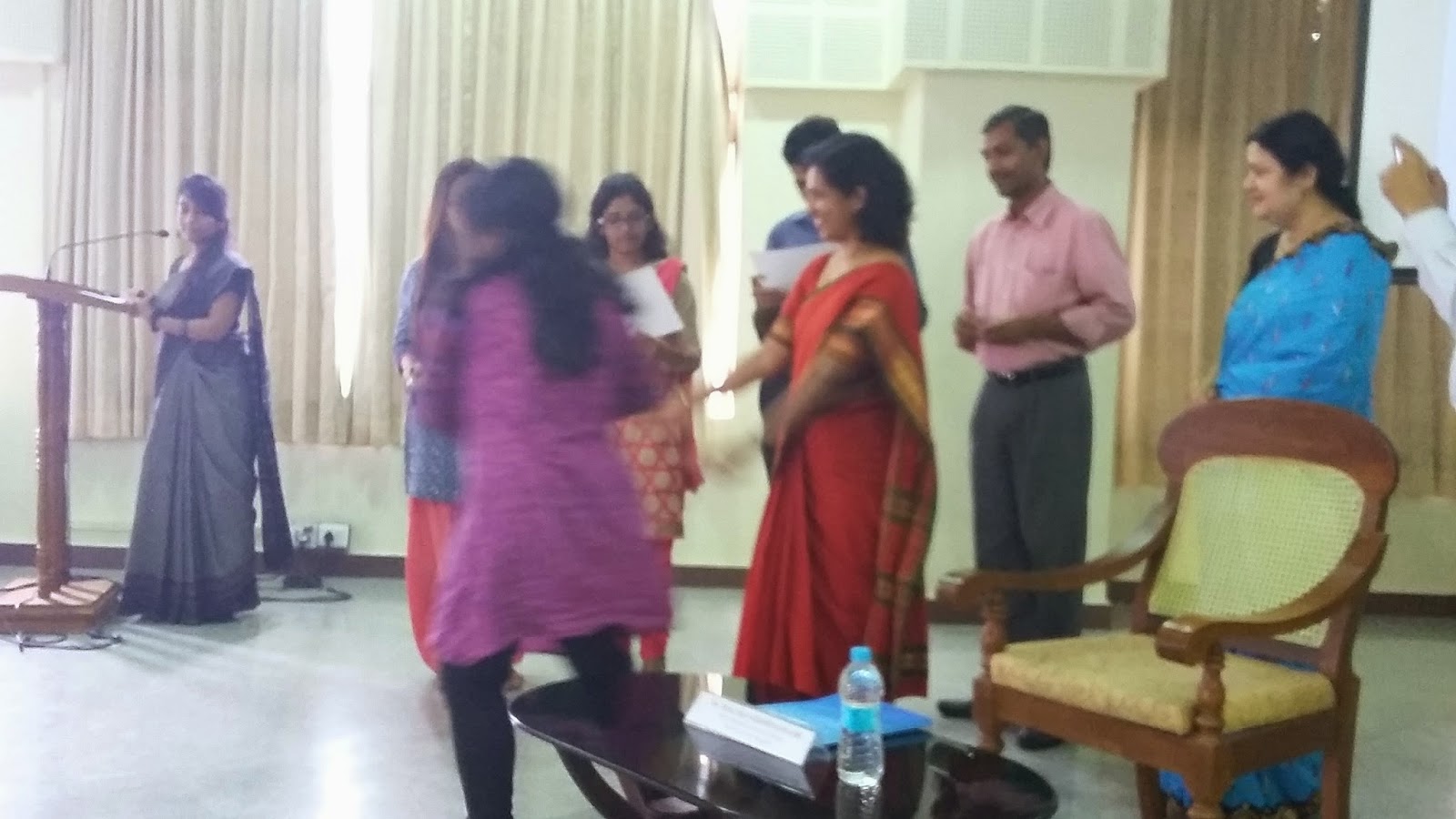 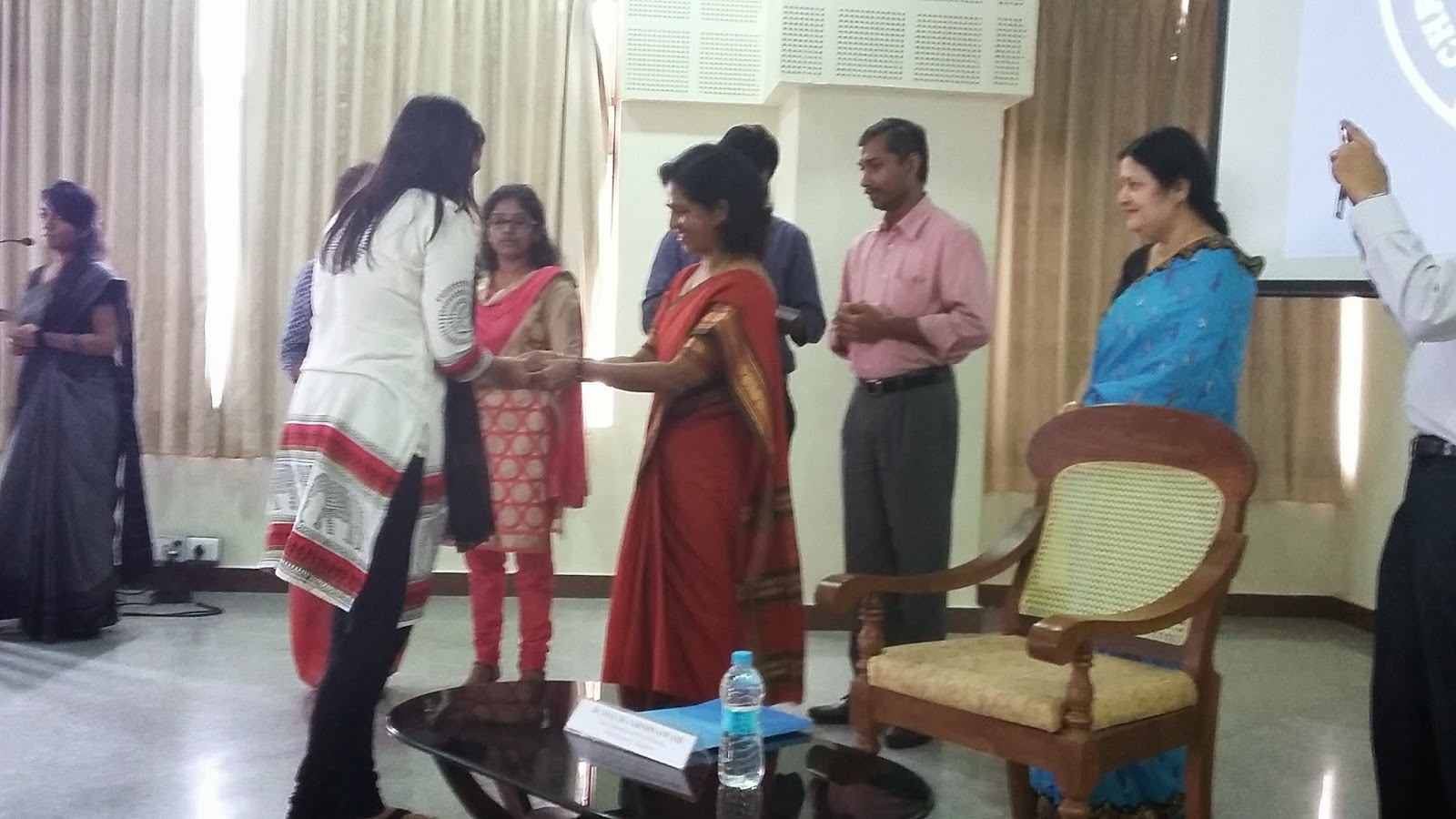 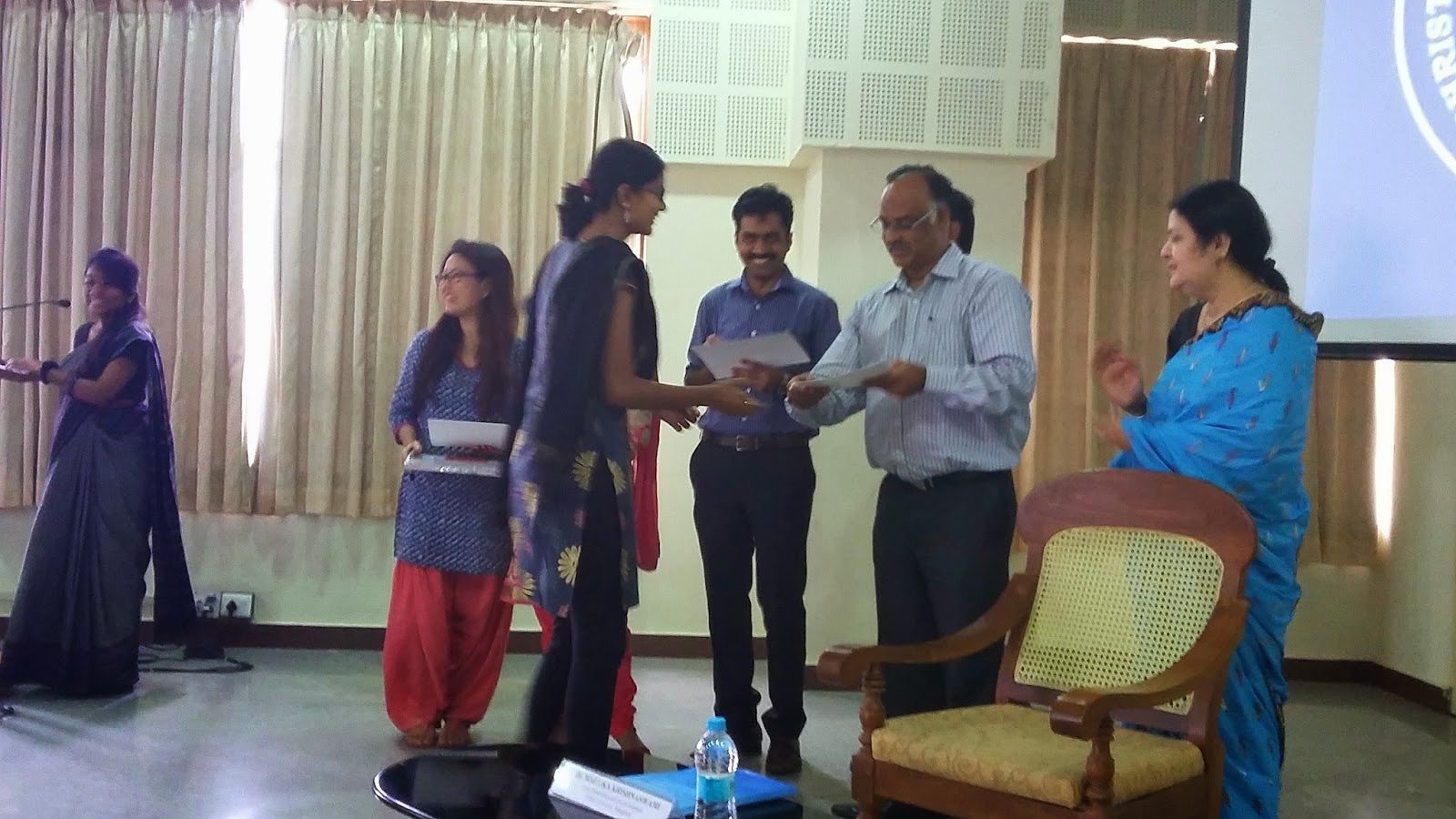 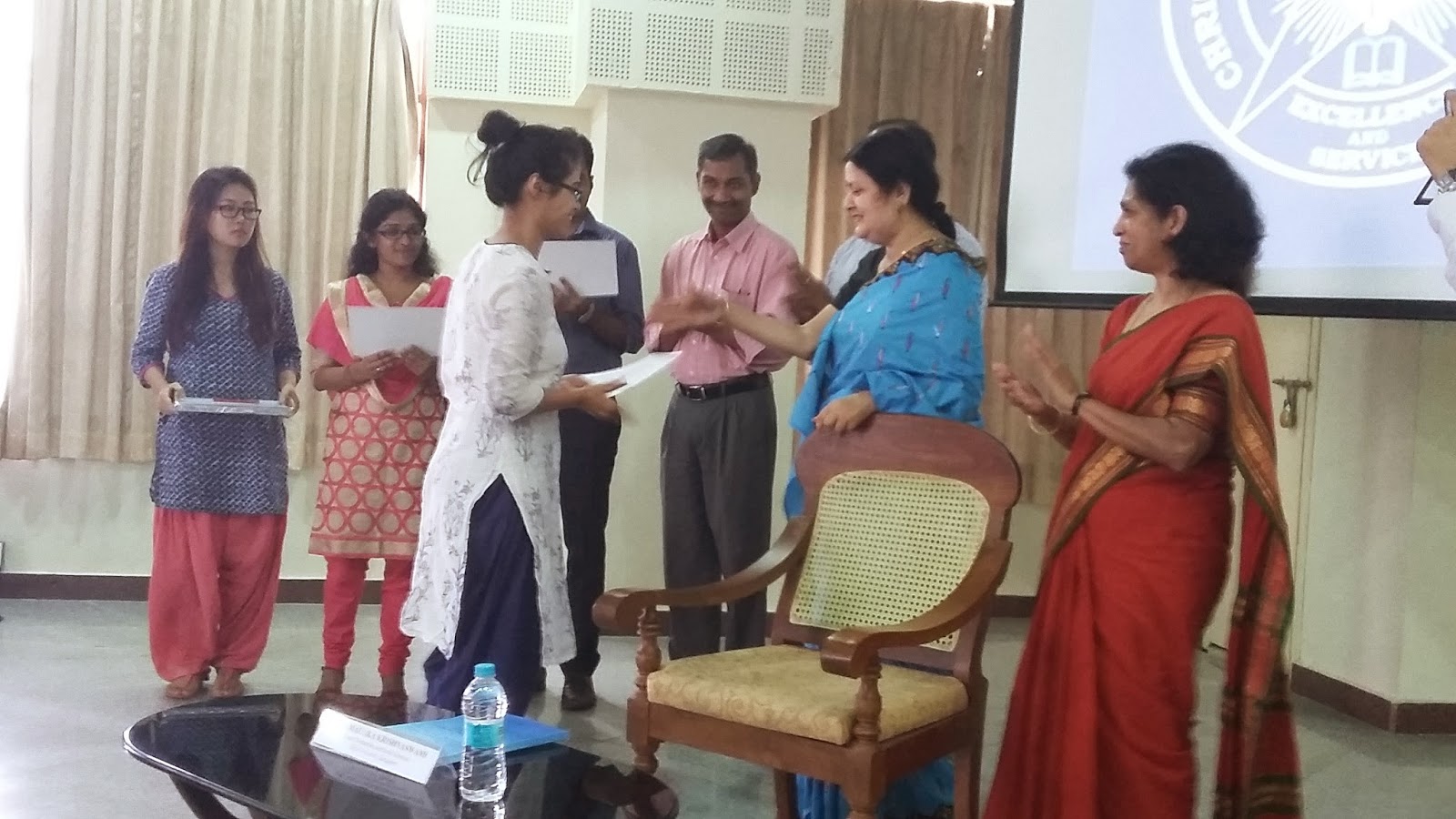 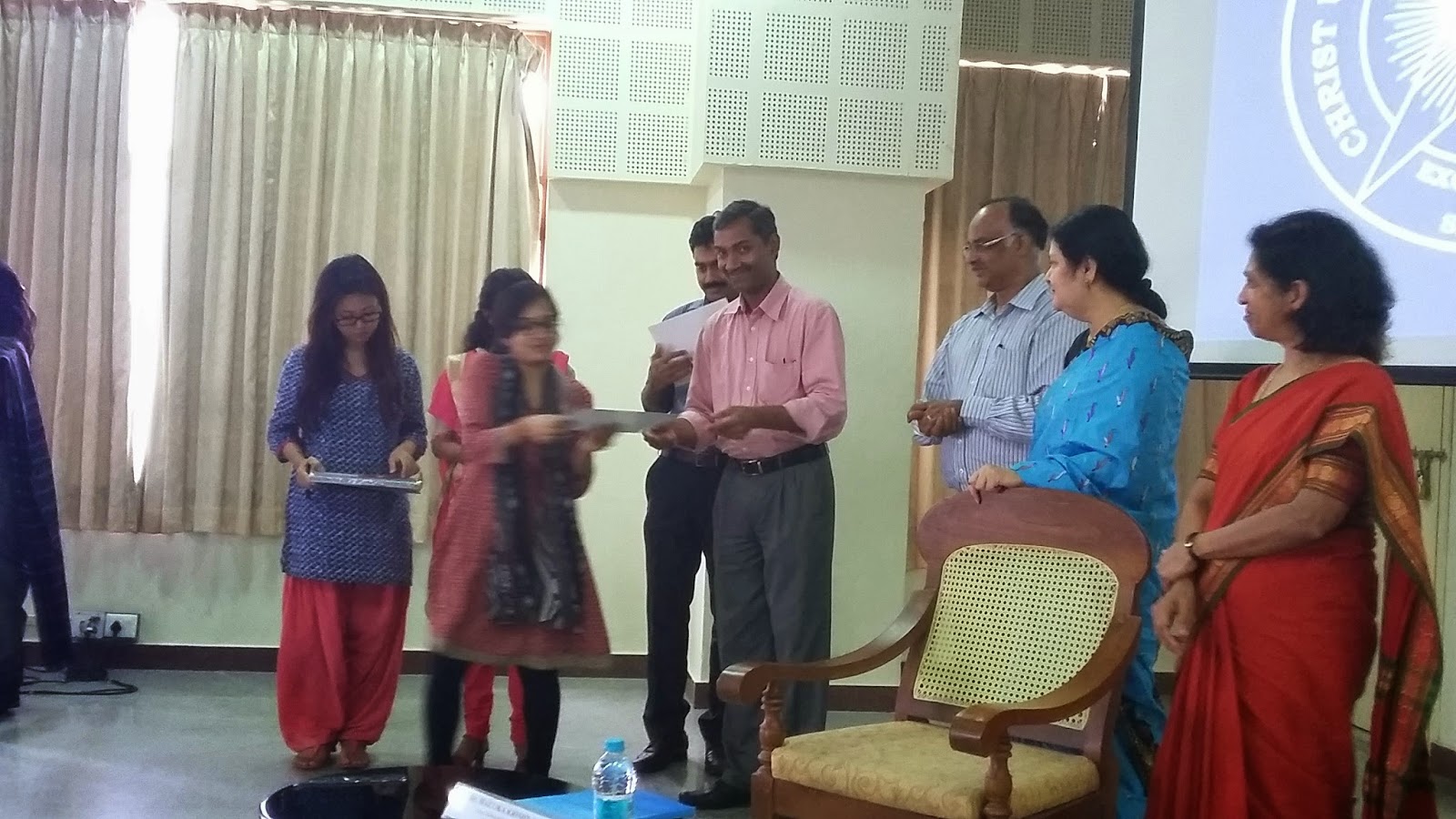 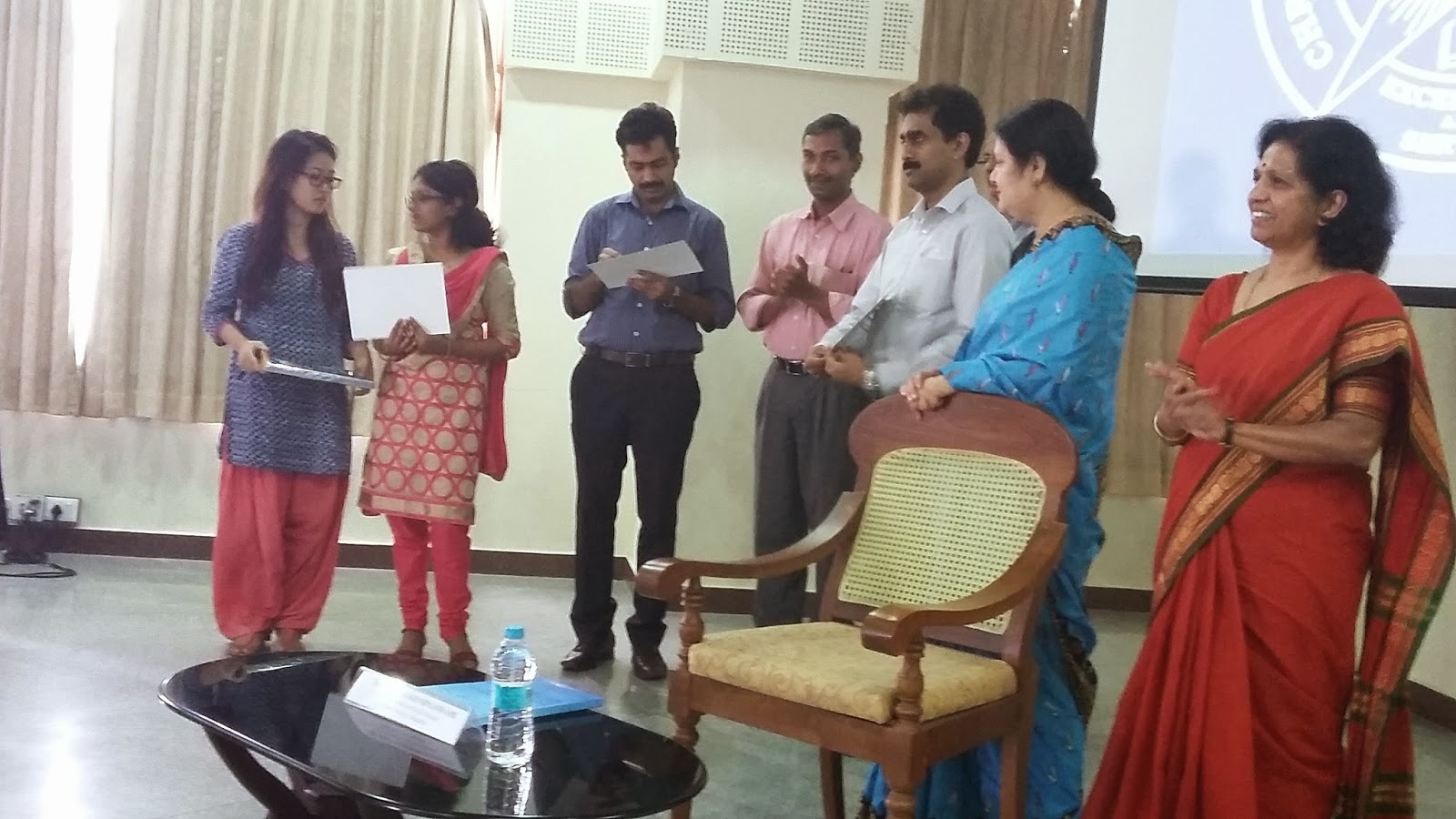 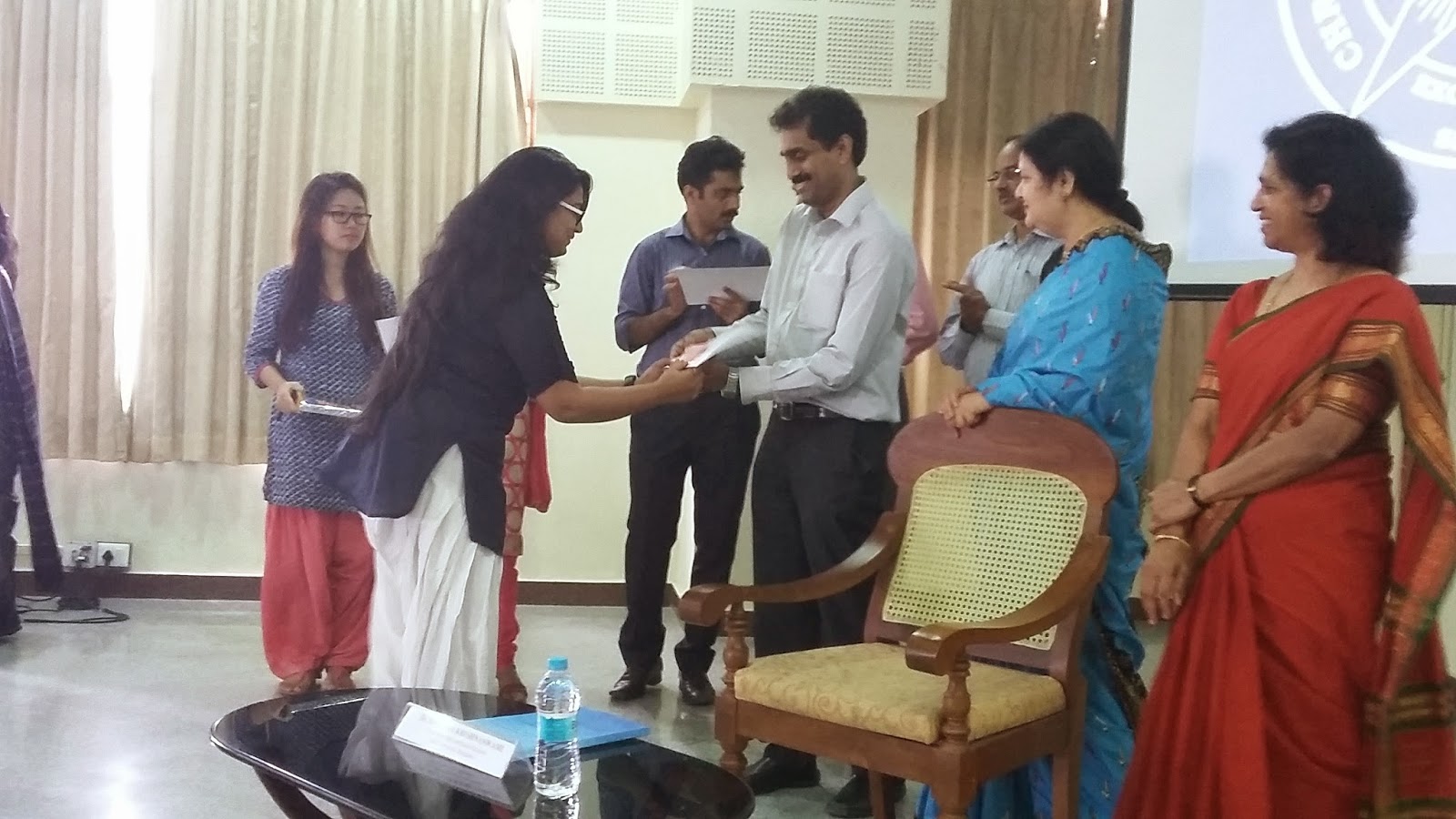 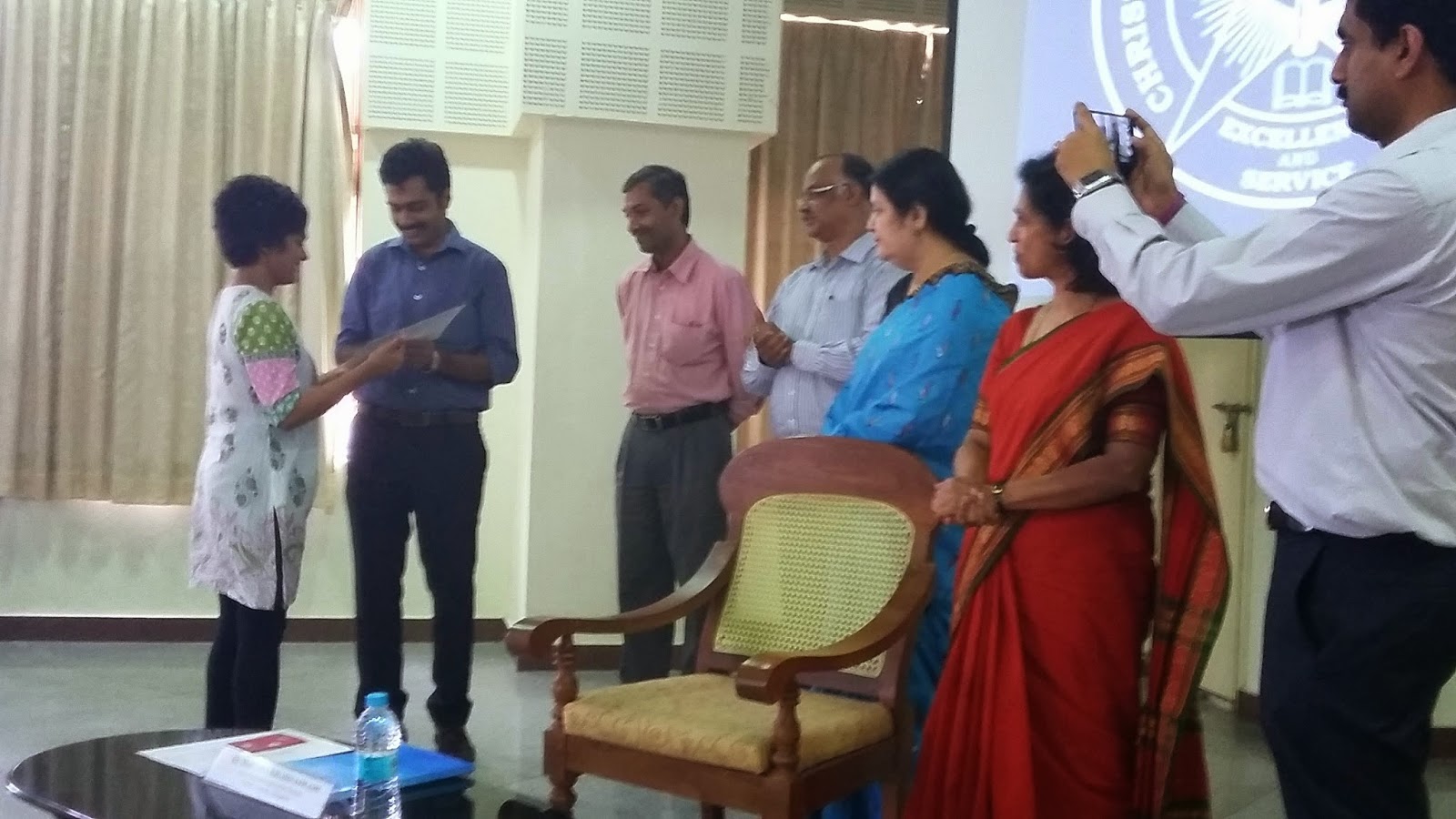 Posted by Department of Sociology at 19:41