India has always been a culturally rich nation due to its unique ethnic diversities. The Department of Sociology at Christ University acknowledged its heritage by encouraging the second year students to organize and participate in an interactive Sociology Activity hour on the August 24, 2016. In order to celebrate and showcase the diverse art forms prevalent the theme selected for the production was ‘Multiculturalism.’

Imbibing the theme the students of second year PSEco coordinated the activity hour by putting forward a vibrant medley of dances encapsulating various traditional art forms from different parts of India such as Cheraw from Mizoram, Bhangra from Punjab and Garba from Gujarat. The exuberant performances exposed many students to existing art forms and various other aspects of culture such as clothing, type of music etc.  The lively stage act was followed by an informative session by a member of our very own Christ family, Miss Lakshmi Sharma. 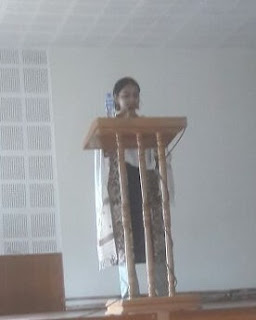 Ms. Sharma completed her undergraduate degree in the course PSEnglish from 2011 – 2014 and went on to pursue her graduate degree in Social Anthropology at the globally prestigious Oxford University in the United Kingdom.  She informed the audience about her experiences at Christ and Oxford while also touching upon the process of applying to universities overseas. As a student at Christ the multi – disciplinary approach exposed her to combine various methods of study, which culminated in the form of a research paper which later became the base for her graduate level dissertation. Identifying the common themes of religion, economy and culture in the literary works of Gorur Ramaswamy Iyengar’s ‘Namma Oorina Rasikaru’ and M N Sirnivas’s ‘A Remembered Village’; Sharma highlighted despite caste base distinctions, religious celebrations like Yakshagana brought a unified experience among people, and how they consume culture.

Ms Sharma’s session was both informative and inspiring as she shared her experience as a student who began her intellectual journey from the same stature as the students were today. Encouraging words from an inspirational role model along with insight to pedagogical culture at Oxford motivated the students to realise the endless possibilities that one could make from the extensive provision of opportunities at hand.

The idea of a production proposed by our Professors were indeed productive, educative and pleasurable as it reinforced the value that learning needn’t always be confined to the four walls of the classroom but rather by the exchange of ideas as individual actors interact with one another.
Posted by Department of Sociology at 00:00