On Thursday, the 21st of September, the elective class of Analysis of Contemporary Social Problems taken by Dr. Sudhanshubala Sahu, was addressed by resource persons Ms. Sangeetha and Ms. Varsha, representing the non-profit organisation Janaagraha. This lecture, rather, a productive interactive session, proved to be quite a success, proven by how involved the students seemed to get as the talk progressed.
The resource person, Ms. Sangeetha, spoke about the organisation, its vision, mission and objectives. Their emphasis is on “improving the quality of life” of Indians through active citizenship, and community initiatives. The organisation seeks to bridge the gap between the people and the government, thereby attempting to facilitate good governance and full utilisation of government facilities. Their main focus, therefore, is on strengthening democracy by enhancing civic sense, awareness, and involvement in the urban domain. It also extends to empowering the local government by spreading awareness about the benefits of a more representative government, and high-level citizen-engagement.

A few highlights include their unique corruption-curbing initiatives such as I Paid A Bribe, which serves as a model in countries abroad, where anyone can log onto Janaagraha’s website and lodge more of a “report” than a complaint, about a bribery that they have witnessed or themselves participated in, with complete anonymity, thereby creating a consolidated log book presenting the pervasiveness of bribes in the country, to lobby for stringent action against the same. 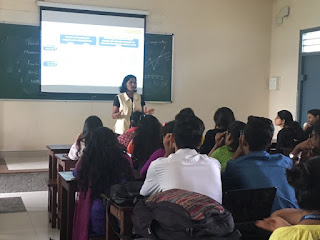 Another stellar scheme is I Change My City, a platform to build a network of local elected bodies and citizen communities, to provide a feasible and extremely useful database, training and networking circles, to tap into the local government’s highest potential for effective governance and constituency welfare.
Janaagraha has an important off-shoot called Bala Janaagraha, which aims to establish a reciprocal relationship with student communities of the city that the respective branch of the organisation is set in – by rendering training programs about civic engagement, active citizenship, and change-making. And in return, as Ms. Sangeetha narrated a few exemplary instances of brilliance of young minds, students contribute to the world of knowledge and innovation with ingenious inventions, ideas, and creativity. A plethora of such initiatives are the brainchild of Janaagraha, such as imatter, My City My Budget, City Blueprint, etc. 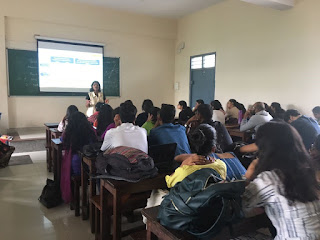 Reflecting on this session, most students found it quite stimulating, and refreshing as they had previously engaged in or at least been exposed to NGOs that focus only on the underprivileged, or the marginalised. This organisation was considered novel for it concentrates in the urban sector, hence making it more relatable to the students. The motives with which Janaagraha was established and functions, namely, promoting active citizenship and efficient governance, were most appealing. All in all, the session provided exposure, motivation, and information, testified by a show of hands, where a bunch of students were even eager to prospective participation in Janaagraha.
Posted by Department of Sociology at 07:43