On the 10th of January, 2018 , The department of Sociology organized a guest lecture by Dr Mark A. Peterson who is a is Professor of Anthropology, and Professor of International Studies in Miami University. He received his Ph.D. from Brown University in 1996. 2014). Dr Peterson specializes in global flows of culture, including news and entertainment media, marketing and consumption and has authored several books such as Anthropology and Mass Communication: Myth and Media in the New Millennium in 2003 and Connected in Cairo: Growing Up Cosmopolitan in the Modern Middle East in 2011. This guest lecture was organized for the students of First and Second year MA Applied Sociology. 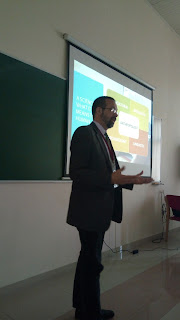 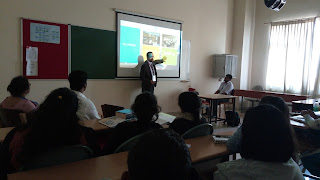 The lecture was talking about the methods of American Anthropology adopted to understand the effects of mass media on people in society. He talked about how Anthropology in USA stands alone as a separate discipline as compared to that of India where Indian Sociology and Anthropology developed together. He talked about the various methods that anthropologists use to understand how behaviour can be understood through the way people interact with the media and how people behaviours are very much influenced by mass media. He spoke about his field work in Egypt and analysed the influence of media over children and adolescents through their with pokemon merchandise such as trading cards. He also talked about the relevance of such studies and these methods in today’s world as more people are engaging with the mass media today and its growing.


This lecture was very beneficial for the students of sociology as it gives us theoretical framework of how the mass media has the ability to influence the way people behave. We are used to ethnographic methods being used mainly in the understanding of rural society today but this brings into light how methods of anthropology can be used to understand the behaviour of people in digital spaces as well . It also brings about an interdisciplinary approach which empowers us as applied sociologists to understand people at a deeper level across several context.
Report by Dheeraj
Posted by Department of Sociology at 08:53