CHRIST Women of the Year

The Sociology and Social Work Association of Christ Central Campus celebrated International Women’s Day on March 6th by hosting the event, Christ Woman of the Year 2021. This was the third consecutive year that this event had been held. The host welcomed the gathering and introduced the agenda for the event. The event began with a prayer song by Rishi and Tina from the department. This was followed by a welcome address, given by Ahana Mukherjee. She talked about the importance of celebrating International Women’s Day and detailed this year’s theme, “Women in leadership achieving an equal future in Covid”.

Prof. Hemalatha, who played a key role in planning the event, then took to the stage to deliver a few words regarding the necessity of celebrating this event every year. She acknowledged the celebration of “Christ Woman of the Year” as a worthy tradition and traced world history to pinpoint when women started protesting against the long working hours and pay disparities. The professor also directed attention towards the increasing number of powerful women, across ages, in all spheres, be it online, industry or political. She encouraged women to amplify their voice and remember the theme of the women’s campaign, “Choose to challenge’, through which we need to continue to celebrate women's achievements.

This enlightening address was followed by the HOD, DR Victor Paul sir, who introduced esteemed awardees. The awardees are from three categories: faculty, support staff, and housekeeping, to recognise women’s efforts in different university sectors.

The HOD expressed his gratitude to the association members and staff and invited the respected Vice-Chancellor to honour the awardees.

He introduced the first awardee, Dr Suniti Phadke, the current Chief Advisor in the Office of International Affairs. She holds a PhD in the area of Management and obtained her MBA from New York University. She has played an important role in conceiving and implementing plans that helped develop connections with international universities.

The second awardee, Ms Cimimol Jacob, is the programme manager in the IT section of the university. She has served in the university for ten years and has experience ranging from 20 years in the IT profession. Prof Victor Paul identified Ms Cinimol as a critical driver behind technological innovations and who has been responsible for the smooth functioning of Christ’s Knowledge Portal.

The Vice-Chancellor honoured the esteemed recipients with awards and tokens of appreciation and then delivered his address. He began his speech by acknowledging the struggles of women and extended his sincere gratitude to all awardees. He praised each of the awardees for their respective efforts extensively.

Dr Anil Joseph Pinto, the Registrar, who supported the planning and implementation of the event, remarked that the award’s value lies in the valuable contributions offered by the recipients of the award. He congratulated each of the awardees and appreciated them for their dedication, professionalism, innovation and constant effort. 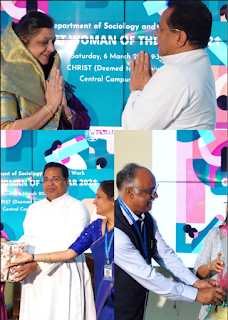 Prof. Suniti expressed her sincere gratitude and talked about the importance of women's day. She raised the question, whether the day is still relevant and answered this question with alarming facts about women’s position in today's society and the things yet to be done. She further listed some role models and encouraged men to change their mindset, to start the change from the grassroots level. Ms Cinimol expressed her gratitude to her superior officers, department, team members, university and family members; She further dedicated the honour to her team members. Ms Patturmal expressed her gratitude to supervisors and the university for the opportunity and remarked on her happiness in doing her work. The event was concluded with a vote of thanks delivered by Niranjana.
Posted by Department of Sociology and Social Work Student Association at 03:08