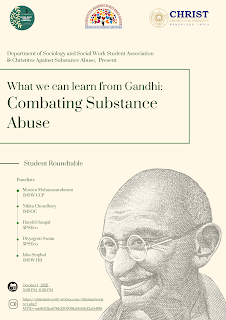 Christites Against Substance Abuse (CASA) under the Department of Sociology and Social Work Student Association conducted the semester’s first student roundtable on the 1st of October. A panel of five students was set to participate in a discussion on the theme ‘What we can learn from Gandhi: Combating Substance Abuse’ on Gandhi Jayanti and National Anti-Drug Addiction Day. The welcome address was presented by Pooja A from 5PSEco. She warmed up the audience by conducting a short quiz, promising a gift for the first person to answer each question correctly. She then introduced the panellists - Isha Singhal from 1MSW HRDM, Nikita Choudhary from 1MSOC, Monica Mohanasundaram from 1MSW CCP, Divyajyoti Swain from 5PSEco, and Harshil Sangal from 5PSEco.

Isha initiated the discussion, talking about abuse and misuse, tolerance and dependence, and forming plans to prevent the same. She quoted Gandhi on his perspective on substance use and its effect on gender and domestic violence, morality and society. She ended by stating that we must either reduce or entirely eradicate the use of such substances, as it is not worth the fleeting moment of ecstasy, and related it to Gandhian Marxism and his notions of ahimsa.

Next, Nikita highlighted the increase in substance abuse, especially in adolescents, during the pandemic. This could be attributed to loneliness, sudden mental changes, and higher domestic violence rates. The announcements of lockdowns led to hoarding of alcohol.

Nikita talked about how Gandhi perceived alcohol to be a manifestation of the devil that destroyed both the individual and society and advocated for compulsory sobriety. She spoke about how political parties use alcohol to maintain political dominance in specific constituencies. She also talked about Gandhi’s principle of Sarvodaya and how it led to the upliftment of society.

Next, Monica highlighted the sexual abuse aspect of substance abuse, such as harassment and marital abuse. She also talked about how the patriarchy ingrained into our society forces women to stay silent about this abuse. She put forth a fundamental question, can a ban on alcohol consumption substantially reduce domestic violence? Such violence has several other dimensions, but alcohol prohibition can reduce its reduction. She talked about how Bihar and Mizoram have tried implementing such measures, but its success was debatable in practice due to a lack of mandates that regulate the black market and other such loopholes. She then questioned the state of today’s generation due to such prominent substance abuse in recent years. She ended by saying that we should keep in mind the dharmas of Gandhi, especially the principle of ahimsa.

Then, Divyajyoti took the discussion forward by talking about substance abuse as a growing problem and then looking at it from Gandhi’s perspective. He then highlighted research that prohibition does not reduce substance abuse. Personal freedoms in the modern world mean the forced ban is often counterintuitive, and thus we must inculcate Gandhi’s notions of responsibility and understanding into a balanced use of substances. He talked about the development of self-control as a skill. Further, he said that labelling alcohol as synonymous with the devil creates a stigmatised society, and one must thus approach the issue differently.

Finally, Harshil ended the discussion by summarising Gandhi’s thoughts on alcohol, smoking, and vices. He supported these thoughts that such substances cause severe issues to public health and society but also said that we must not go so far as to call it the drink of the devil. Instead, we must find a balanced and responsible point of use. He highlighted India’s long-standing history of cannabis use and thus said that responsible use is possible if we have constructive discussions about the same. He talked about Gandhi’s belief in naturopathy and rejection of medical drugs. He used this to talk about how some drugs are indispensable for medical use and thus disagreed with Gandhi on this point. He concluded that bans never work; however, the decriminalisation of substances combined with better mental health infrastructure can better solve the problem. We must look at it as a societal problem instead of a criminal one.

Following this, Pooja took over, throwing the floor open to the audience for any questions. One student asked Harshil about how we can induce a cultural shift when it comes to substance abuse, who replied by talking about the importance of being open-minded and communicative. She also welcomed closing remarks from the panellists, who spoke about how we must work towards reducing the negative effect of substance use and how there is a lot to be learned from Gandhi about the same.

She then invited Dr Reena Merian Cherian to address the audience, who talked about the practical applicability of self-control and appreciated the emphasis on women. This concluded the session, as the association extended their gratitude to the audience and the panellists.

Posted by Department of Sociology and Social Work Student Association at 01:28