Annual Sociology Lectur Series 2022: Understanding the Law through the Lens of Sociology 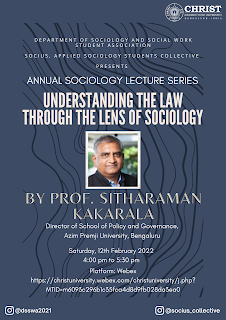 Socius, the Applied Sociology Students Collective in association with the Department of Sociology and Social Work Student Association organized a lecture titled “Understanding the Law through the Lens of Sociology” as part of the Annual Sociology Lecture Series 2022. The lecture was delivered by Prof Sitharamam Kakarala, Director of the School of Policy and Governance, Azim Premji University, Bengaluru. The lecture was appropriate in view of the current social circumstances. It helped students of sociology look at societal problems and the law with respect to them through the lens of sociology. Prof Kakarala structured the lecture in such a way that it was easy to follow through.

He began by underlining the meaning of law and then explained the various approaches to looking at law briefly. Prof Kakarala, through various instances, substantiated how both social context and law influence each other. A social question gets translated into a protest which has implications for certain implications and then gets legally represented. He cited the current Hijab issue as an example, with his interest lying not in its resolution but rather in the social context. He reflected upon the issue by remarking how protests emerge in the context of the new ideology and new social forces evolving

The sovereign law is the dominant view of the law, which gives an objective lens to understanding society. Thereby, it can be termed a ‘positive law’. Historians and philosophers have seen the law from another perspective outside the framework of the state. In this context of statelessness, religion influences the understanding of the law. The third king of approach to law views it as a source of social solidarity. As per this notion, humans actively create standard norms and principles for action. 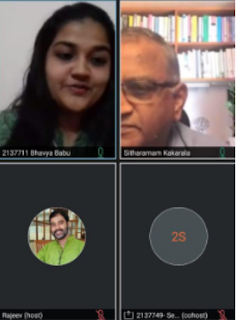 Moreover, the law has a technical and a non-technical side and a social side. On its technical side, it is an autonomous discipline and a positive science since its conclusions are arrived at after logical reasoning. There is a need to understand how this discipline affects our everyday life since it has a social side as well, much like the discipline of physics, which the professor used as a metaphor to support the point. Therefore to understand law sociologically, one needs to take into account the social context. Professor Kakarla explained how laws have evolved, transformed and acquired the meanings they have right now. They were embedded in a social context when the country already had a number of systems co-existing, like the scriptures. Therefore the nature and scope of those rights keep getting redefined in view of different emerging social forces.

The lecture was followed by a question and answer session, wherein the students present for the talk put forward their doubts and queries to the professor, who answered them in detail. The event came to an end with a vote of thanks.

Posted by Department of Sociology and Social Work Student Association at 22:27