Sambandh is an annual intra-collegiate fest, organised and hosted by the Department of Sociology, Christ University. Each year, there is a specific theme aligned to the festival, in accordance with the discipline of Sociology, around which the events are conducted. The theme for Sambandh 2017, much like the name itself suggests, was “Relationships”. 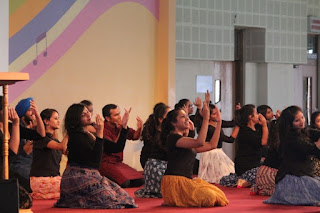 The students of Sociology, namely, the courses EPS, PSECO, PSENG participated in the events. A wide array of events and activities were conducted such as, essay writing, tessellate (based on the idea of extempore), short film etc. The events which the students were most enthusiastic about and participated in large numbers were, blindfolded conversations, poetry, face painting and photography.
The opening of the fest was marked by the “Blindfolded Conversations” activity, conducted on the basketball court of the university. Each participant was paired with a person, unknown to them, and was free to engage in a conversation about interests mutual to both of them. The activity was a huge success, and it addressed the theme of the fest, “Relationships” in its true essence and an innovative way by building new friendships. Through the weeks, the other activities were conducted, all revolving around the same theme. Each receiving a lot of attraction and active participation.
The closing ceremony of Sambandh was conducted on the 8th of December. The ceremony started with the President of the Sociology Association, Ms. Samyukta Chacko, introducing the essence of the fest to the audience, followed by a brief summary of events. The Head of the Department of Sociology and Social Work, Dr. Victor Paul, was then invited to the stage to inaugurate the ceremony by addressing the gathering and sharing his views on the topic “Relationships”. The Sociology Association then presented a video to the audience, which showcased all the evens that were conducted through the course of the fest. 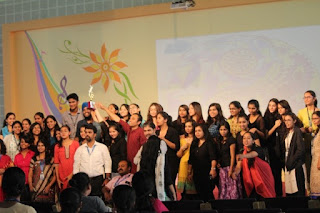 The most awaited event was also conducted on this day. All the students and faculty members gathered in large numbers to support their classmate and students respectively, as they represented them on the stage, in the event, “10 minutes on stage”. This event was judged by Dr. Abhilash Chandran from the Department of English. 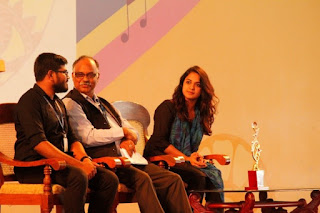 The course that bagged the overall trophy for the 2017 edition of Sambandh, for the second time in a row, was 3rd year PSECO. All the faculty members of the Department of Sociology were called on the stage to present the trophy to the winners, followed by a group photograph. In closing, the MA sociology students sang a song, which marked the end of Sambandh 2017. The programme was then concluded with the vote of thanks given by the Vice-President of the Sociology Association, Mr. Clinton P.
Posted by Department of Sociology at 23:17