Book Talk: In Defence of the Ordinary by Dr Dev Nath Pathak

In collaboration with Socius, the Applied Sociology Students’ Collective, the Department of Sociology and Social Work Students Association organised a conversation with Dr Dev Nath Pathak, Assistant Professor of Sociology, South Asian University, Delhi, on his book “In Defence of the Ordinary”. The event took place on 8th September 2021. 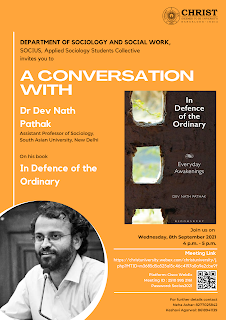 The event began with Neha Ashar of 3 MSOC delivering the welcome address. This was followed by Prof Victor Paul, Head of the Department, addressing the gathering. Meenakshi from 1 MSOC was then called upon to introduce Dr Dev Nath.

The discussion began with Dr Dev Nath discussing the central premise of his book. Dr Dev describes the book as one which could be read at ease. It is written in a conversational style and has been an excuse to interact with young scholars.

The book aims to make the self of the reader the subject of analysis; it is a rumination on the idea of ‘ordinary’. It tries to understand ways of looking at the ordinary from the ordinary itself. This view offers a point of departure from the structures we see in social reality. The focus here is on non-glamorous, mundane, imperfect aspects of our lives—for example, the drudgery of bringing up a child. The aim is not to romanticise the difficulties of bringing up a child but to understand the various possibilities that accompany it.

It celebrates an old and almost forgotten perspective called Lokayata. Dr Pathak says the book operationalises the Loyaktic tradition. An essential part of this tradition is Vitanda Vaad, a form of debate where a thesis is countered with an anti-thesis. However, the persons involved in this debate aim to understand the other’s perspective.

Human beings are psychoanalytic creatures with colliding emotions and inherently rebellious beings. Despite the hierarchy of emotions we have established, it is the recognition of less-talked-about emotions like hate.

Dr Dev proceeded to talk about addabhaasi (chitchat), and its variants across South Asia. Chitchat is a way by which we make sense of our ordinary lives. Here, we make observations and witty comments about our lives and one another that would have slipped even the attention of anthropologists and other scholars.

In response to a question asking what prompted him to write this book, Dr Dev says that the book is not an objective work and contains the author’s self. He also has commonsense ideas that are essential to social sciences. No science is free from commonsense, and there is a great deal of jugaad in scientific innovations.

He wrote this affected by a system where our professional priorities are misplaced. Everyone is expected to be a ‘famous name’ who performs extraordinarily well in any field they pursue. This book is, thus, a protest against the formula for success and the anxiety-inducing regime we are a part of.

Dr Pathak answered questions related to his book. One of them was concerned with truth becoming the dictum of the scientific empiricist faith. He answered this with various examples derived from multiple areas like mythology, films, and pop culture. The emphasis was on understanding the truth concerning half-truths to make sense of a post-truth world.

Dr Dev then shifted the conversation to classroom teaching. He questioned the practice of looking down upon students’ commonsensical understandings and the imperfect articulations of their observations and experiences. He believes that it is important to engage with these thoughts that provide the locational embodied knowledge of the students.

In response to a question from the audience, Dr Pathak discussed what he believes to be a ‘data war’ in the contemporary post-truth world. Data is presented by people with different perspectives, in a crisp format. He discusses Rushamon as his preferred resolution of this issue. The data war makes us forget that we all have half-truths or different perspectives of reality. We forget that we often selectively engage with data. Ordinariness on the contrary is not a monolithic whole but has dynamic layers to it. He notes that there can exist multiple perspectives and interpretations, as long as no one of them is proclaimed as the Truth.

The ordinary is also the site where various oppressions come into practice. We look to release ourselves from oppressive layers of ordinary to layers that are more liberating.

Dr Pathak aims to pass on to scholars the discomfort that he believes is necessary to improve our understandings, to go beyond the clear distinctions between various disciplines. It is necessary that we nurture this discomfort and sense of playfulness for a young discipline like Sociology to grow. We need to grow out of this fear of certain kinds of data such as photography and other visual media. We have been copying from sociology in the West but have not learnt some lessons such as moving forward from debates concerning objectivity and subjectivity, for example. In this context, he also stresses the importance of enabling students to connect classical sociology with contemporary sociology.

In response to a question on the ordinariness of silence, Dr Pathak talked about streams of consciousness that cannot be translated into speech. Silence has speech value but cannot always be articulated, just like dreams cannot be fully retrieved. Speech and silence can be vulnerable and distorted, but they are also incredibly powerful.

The session was concluded with a vote of thanks by Keshavi Agarwal of 3 MSOC.

Posted by Department of Sociology and Social Work Student Association at 00:02