The Department of Sociology had organized a workshop on Participatory Rural Appraisal (PRA) on February 9 and 10, 2017. Given below is the report on the same.
February 9th, 2017
The first day of the workshop was a theory class on Participatory Rural Appraisal by Mr. Murugan. As a typical data collection process would be very time consuming, with the PRA, we can rapidly collect data to get a comprehensive understanding of the complexity of rural societies. Participatory Rural Appraisal is a semi structural tool to assess the status, problems, needs and aspirations of people residing in the area. The objectives of conducting PRA are:
a.       To learn and familiarise with the current situation
b.      To arrive at an agreed set of possibilities for further development
c.       Leads to mutual support in planning, implementing, monitoring and evaluation
PRA is most effective in an area of not more than 150 households and has an accuracy rate of 80%. The idea is to gather information directly from the villagers. Identify key informants (typically they are individuals who have been living there for a long period of time) and they will give all the details regarding demography, topographical features, wealth accumulated etc. Various tools are employed under this – social mapping, wealth ranking, transect walk, resource mapping, seasonality analysis, time line & trend analysis, Venn diagram, matrix scoring and skill mapping. Once we understood the processes of each tool we were divided into 4 teams – social mapping, wealth ranking, seasonality analysis and documentation. Each team sat together and came up with their game plans. We prepared for the field visit and presented our interview schedules to Murugan Sir and Maya ma’am.
February 10th, 2017
The 3 hour journey to Yalachammanahally was spent watching ‘Force 2’. As soon as we reached, Murugan sir directed us to take a walk around the village. After our recon and a cup of tea, the teams got to work immediately. Each team had 3 student translators and 3 members of the documentation team. 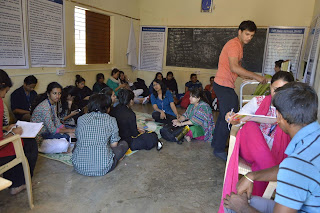 SOCIAL MAPPING
Language was a barrier; the translators did most of the work due to which others felt sidelined. Mr. Murali and Ms. Sarojamma were the two key informants for social mapping. It was a time consuming process as only one was drawing the map but on the other hand because only Mr. Murali was drawing there was less confusion. Instructions were given by Murugan Sir and Maya Ma’am which led to better productivity. Keeping aside language and the initial hiccups the team members worked hard to draw the social map. Mr. Murali was interviewed by the group to get the demographical details of each of the 47 households, like - the number of family members, facilities and education.
The team found all but 3 nuclear families. Though they wanted a better future for their children only primary education was free. The rich families sent their children to English medium schools in nearby towns.  Though child marriage is not practiced anymore, some girls got married at that age of 16 (average). 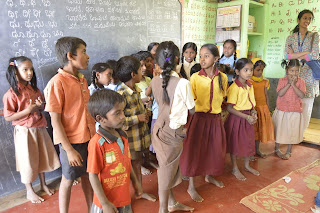 WEALTH RANKING
After the social mapping team got the list of households, the wealth ranking process began. Students enlisted the help of 7 villagers to be the teams’ key informants in this exercise. Three indicators were used - gold ring, watch and a pen – to represent three economic classes. The informants discussed amongst themselves and placed each household in a category. Then they were asked to share the reasons on the basis which they divided.
In total there were 7 rich households, these were mostly government employees or had their own business (poultry farm). They owned more or less 3 acres of land, tractors, and cars and lived in stone roofed houses. They also had money for rotation and savings in bank.
The 17 middle class households lived in AC sheet roofs and owned less than 2 acres of land. They had very little assets and earned their livelihood as daily wage labourers.
The remaining 20 households worked as seasonal labourers. Their houses were not in good conditions and they borrowed money to meet their needs.
According to the informants, there were no joint families in the village and already 3 families have migrated out in search of jobs but none have returned. 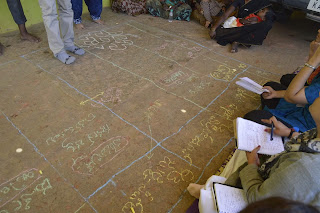 SEASONALITY ANALYSIS
There were 9 informants for seasonality analysis’ group discussion – Geeta, Pilamma, Shrilakshmi, Ratnamma, Geeta, Nagamma, Ratnamma and Yeuklashamma. All 9 informants were female and daily wage labourers. The student translators served as the liaison between the informants and the team. The questions revolved around the religious, ceremonial and agricultural activities. All informants were forthcoming and were eager to answer all questions.
The student team drew a table on the floor to analyse the festival, crops and marriage systems in the village. The village comprises of only Hindu community. The main agricultural crop is ragi, which is cultivated in June - July. Other crops like corn, mustard, peas, cauliflower, and potato are grown throughout the year. Since the past 10 years, people have stopped practicing organic farming. Ugadi, Varmalakshmi and Vijaylakshmi are the main festivals celebrated. Marriages take place in the month of April, May and June.
No labourer from outside comes to work on the fields even for daily wages. The minimum wage rate as implemented by the government is not applicable here. The village sangha is the primary access to finance that the villagers have, charging less than 2% p.a. 2 people from the sangha serve as witness for lending money. 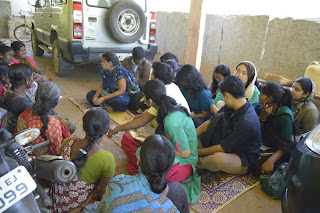 REFLECTIONS
The workshop was a great exposure as most of us were doing a field exercise for the first time. Earlier we had a theoretical clarity but this field exposure gave us a clear understanding to our roles as researchers.
First of all, these tools were tried in a controlled and familiar environment. The village is adopted by the Centre for Social Action and is used to having the Christ University students visiting them. Murugan sir had informed them of our arrival and had arranged for informants. He was also present for each of the exercises, thus the role of us, as researchers, to build the rapport was minimal.
Some of the information gathered by the teams found was contradicting. For instance, team social mapping found 3 joint family households while team wealth ranking were informed that there are only nuclear families in this village. The social mapping team were told that girls are mostly married off by 16, but the informants of seasonality analysis gave the example of how their daughters are getting married at 25 (after they have a job). With such variations, a lot of students questioned the reliability of the source. Murugan sir had told us that PRA has an accuracy rate of 80%, such variations are bound to happen and this proves the need for researchers to triangulate the data collected. Interestingly, the English words the informants spoke were – ‘research’ ‘joint family’ ‘nuclear family’ etc. This shows that they have had interactions like this with many such groups.

Posted by Department of Sociology at 19:09 No comments: 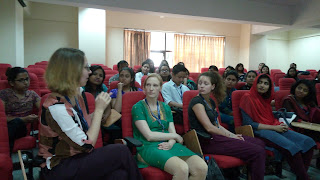 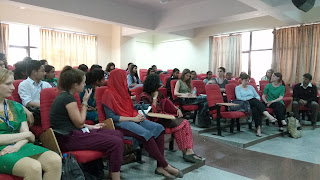 The students and faculty members from both Universities had a vibrant engaging discussion on issues relating to gender from a cross cultural perspective with special focus on the scenario in Switzerland and India.
Posted by Department of Sociology at 19:12 No comments:

Shiv Visvanathan is one of the widely acclaimed public intellectual and social scientists in India. He delivered a lecture on 'Reading the unpopular' on January 28, 2017 at Christ University. His works, innovative stream of consciousness and critical insights were quite popular even before the event began. The talk was witnessed by a full house gathering consisting of students and faculty members.
Professor started off with his proposition that of youth being the most overused brand of the present century. The emphasis on youth and the act of turning a blind eye to the deformities of youth was accused as the primary problems of concern.
What followed was a phase of providing critical insights into the consciousness of the present day youth. The mere silence of present generation was termed to be alarming. The acceptance of ‘order’ as uniformity was heavily critiqued upon. The phenomena of surveillance and threats it possesses were explained in detailed. But the primary question was how the youth had surrendered in good faith to this control mechanism. The passive submission was questioned. Professor explained how the present generation was susceptible for a despotic rule with their consent. This could lead to a autocracy worst that the Nazi days.
The evils of modern day trending philosophies were showcased. He spoke of how more refugees are generated due to the construction of dams than all the wars put together. There was a systematic deconstruction of the concept of ‘development'. Professor spoke of the mad race that every youth aspires to join in. Thereby they are forgetting to exercise his/her agency to dissent. So much is the inhospitality of defeat that no one wants to risk any further failures through dissents.

Through various such though experiments, the professor held the little finger of all the minds in the auditorium and directed them towards the statue of a question mark. What followed was a spontaneous change in audience towards dissent that could be seen in the Question and Answer session that followed the suite.
The debates were intriguing, innovative and multivariate. The wide variety of opinions and critical outlook towards many common world problems were very refreshing and encouraging to see. The scope for involving students in this process of thought experiments and providing them half of the allotted schedule was commendable. It made the session more inclusive and interesting. The witty humor, innovative strategies like vouching for ethical startups sowed seeds for a different line of thought process.
Finally, Shiv Visvanathan did what all speakers aspire to do: to interest, to involve and to inspire.

Reported by
Prajwal N
MA Applied Sociology
Posted by Department of Sociology at 19:17 No comments: