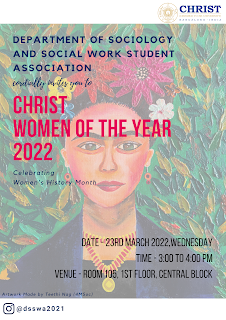 The Department of Sociology and Social Work Student Association organised CHRIST Women of the Year 2022 to celebrate the women who are a part of the teaching, non-teaching and maintenance staff of the University.

The hosts for the event were Ms Nikita H and Mr Allan Lepcha, who addressed the gathering followed by a prayer song sung by Ms Sneha and Ms Fiona. The Welcome Address was delivered by Prof. Hemalatha telling how this is an opportunity to celebrate the contributions of the women in the university to appreciate their outstanding performance and to encourage younger women to contribute even more.

Dr Victor Paul, the Head of the Department announced the three Women of the Year, Dr Theresa Nithila Vincent, Ms Shiny Gilbert and Ms Arulayee who were then honoured by the Vice-Chancellor and the Registrar.

The winners were then asked to address their gathering with their acceptance speeches. Dr Theresa Nithila Vincent mentioned that it is not the position of a HoD of Commerce but the people around her, who were the ones who made her feel empowered. She also told that the Faith of Christ, trust of the University’s Management, the belief and confidence of her teammates, hope of students and the unconditional love of her family brought her here.

Ms Shiny Gilbert gave a thank you note to her family, friends, mentors and colleagues in CHRIST and that is what brought her here today. She made a special mention of Dr Subramaniam, the previous University Registrar, who moulded her professional life in CHRIST..

Finally, Ms Arulayee, the second most senior housekeeping staff in CHRIST came forward to convey her gratitude to CHRIST. Being in CHRIST since 2001, she also mentioned how her son studied on the Bannerghatta Road Campus and is also working there right now. She also mentioned that the love and support of everyone have motivated her to work and contribute more to the university. 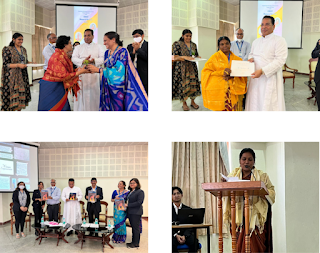 The Vice-Chancellor spoke words of encouragement and appreciation for the women who were honoured and mentioned that the women are the light of the family and the institution. In his own words, “the equal world is an enabled world and the rise of women is not the fall of men”

Following the vice chancellor’s speech, the registrar made a heartwarming speech about how all the women should carry out the message and spirit of the event to the world. He told how women should not just be considered as trophies to their husbands and families but should come forward and contribute more to the world. He also mentioned how equality has always been an element of CHRIST and that gender or class has never deterred anyone from treating others any less.

As the last leg of the event, the gender and sexuality cell headed by Ms Rithika and Ms Shamima of the EDI unit was inaugurated and their first newsletter was released. It talks about the unheard stories of women which is student-curated and designed by women.

As a conclusion to the event, the Department’s Student Association President Keshavi Agarwal gave the vote of thanks and the event came to an end.

Posted by Department of Sociology and Social Work Student Association at 02:59 No comments: 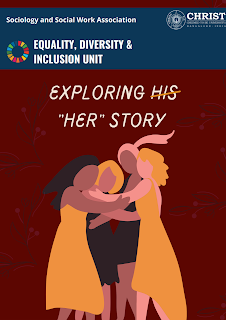 The Department of Sociology and Social Work Student Association for the academic year 2021-22 established the Equality, Diversity and Inclusion (EDI) unit aimed at promoting an inclusive culture that will provide a platform to learn, explore and grow personally, professionally and intellectually.

The Gender and Sexuality cell under this unit is thus an attempt to achieve SDG goal 5 which aims at promoting gender equality. The cell acknowledges gender equality not just as a fundamental human right but rather as a necessity.

The club, therefore, organizes activities that provide a platform to initiate discussions on topics that matter like queer rights, violence against women and so on.

The gender and sexuality newsletter thus was an initiative that provided a space to celebrate women’s success stories and highlight female underdogs whose stories went unheard in the course of highlighting “his” story. The main objective of the newsletter was to recognize and appreciate the efforts of women in various fields, for instance, Grace Banu who is a Trans Woman engineering student. The newsletter also included queer voices. Thus it covered several aspects of goal number five under the gender equality SDG. The newsletter was also aimed at encouraging the students to express themselves creatively through words and art. It served as a tool to bridge the gap and urged students to engage in productive conversations that look beyond the mainstream.

To view the Newsletter, click on the following link:

Posted by Department of Sociology and Social Work Student Association at 02:46 No comments: