International World AIDS Day, December 1, is dedicated to raising awareness of the AIDS pandemic caused by the spread of HIV infection and mourning those who have died of the disease. On this occasion, the Sociology and Social Work Association initiated and invited people to join us on a social media campaign in order to raise awareness regarding the AIDS Pandemic.

Volunteers were urged to update their status with the related image in social media handles and use the hashtags #stopthestigma and #rocktheribbon. 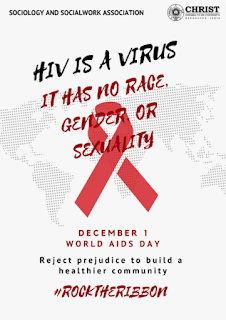 Posted by Department of Sociology and Social Work Student Association at 21:14 No comments:

The International Day for the Elimination of Violence Against Women

The theme for this face painting event - Colours of Violence.

Violence has many forms, students are asked to express what violence means to them using colours and different shades which represent and encompass all emotions and thoughts associated with violence. Giving artists this freedom of expression lead to different interpretations of results as they used the beauty of colours to represent their thoughts instead of using their words. Colours of Violence was an event that showed the hidden emotions of violence that cannot be expressed in words, rather only understood through face-art. It bridged the gap between the silence of violence and the deep-seated manifestation of violence through art.

“The internet records everything and forgets nothing”

This sentence may seem sinister, but cyberviolence has been on the rise, especially during the pandemic. Violence doesn't always have to be outward, in fact, the most impactful and severe violence is mental and psychological. Cybercrime is a serious threat and a source of violence in today’s digital age which can be dangerous for several young women who face cyber-crime. Cyberbullying is another form of violence that intends to damage people’s social image that might be un-erasable due to the very nature of the internet and social media.

This is to call attention to the issue that cyber-violence is a serious and under-rated form of violence that needs to be addressed. This event not only raised awareness on the seriousness of cybercrime but also allowed students the freedom to give their own inputs on cybercrime using posters.

Posted by Department of Sociology and Social Work Student Association at 20:56 No comments:

The Department of Sociology and Social Work Association in collaboration with Socius, Applied Sociology Students Collective organised a talk on Sexual and Reproductive Health and Rights: Understanding Structural Violence against Women. The session was organised with the organisation Hidden Pockets Collective. Their Knowledge Curator, Jasmine Lovely George was the speaker for the session. The event was organised to observe The United Nations International Day for the Elimination of Violence against Women. 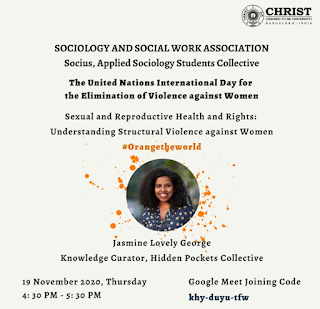 Posted by Department of Sociology and Social Work Student Association at 21:19 No comments: