Artistic expressions provide a sense of solace during adversities. The current pandemic has significantly affected the mental health of most people. Art's cathartic nature helps individuals to express their emotions, feelings and apprehensions freely. “Catharsis Through Art” was a small exercise conducted amongst the students of MA Applied Sociology. Students were invited to send entries of their original artwork and also pen down their feelings about the pandemic. Art is a medium through which most of us express ourselves and our apprehensions. The idea was to compile different forms of artistic expressions to provide a sense of solidarity and solace during the pressing times of the pandemic. Students submitted their artworks ranging from painting, photography to cooking and farming. Since September is Suicide Prevention Awareness month, this activity is also highly relevant in spreading awareness about mental health.

The entire exercise was a success as many students sent in their artwork. These entries were then compiled in a form of zine and circulated amongst the students and the faculty members. Going through the artworks of fellow classmates and also seeing one's own work in the zine was indeed a cathartic experience for the students. 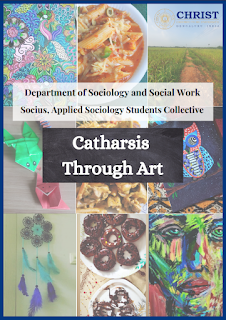 To view the zine, you can click the following link:

Posted by Department of Sociology and Social Work Student Association at 00:28 No comments:

The Department of Sociology and Social Work organised a webinar titled ‘Language Death, Memory and Orality’ on 3rd October 2020. The speakers for this event were Prof. Ganesh N. Devy, Chairman, The People’s Linguistic Survey of India and Founder of the Bhasha Research and Publication Centre, and Prof. Shiv Visvanathan, Professor, O.P Jindal Global University. The webinar was aptly subtitled as ‘a conversation between’ the two speakers. An introductory note was given by the organisers and opening remarks by Dr Rajeev. The conversation explored the vast array of linguistic diversities present in India and the world.

Linguistic imperialism and the resultant processes with respect to dominant languages and dominated languages, the clerical approach towards languages which creates an “othered” category of non-citizens by denying means of expression and the dangers of this in an oral society like India, was discussed by Prof Devy. He also shed light on the drawbacks of the technology - how artificial memory, as opposed to human memory, is linear and therefore lacks a myth-making ability and the ability to look into the future.

Prof. Visvanathan addressed issues around cognitive violence and knowledge systems - certain pedagogies and knowledge cannot be accessed without language since they are all intimately tied together. He also spoke about how the diversity of language is beyond the efficiency of technology, and if languages die, democracy dies, and thus, the need for new languages arises. Prof. Visvanathan talked about having the space for diversity in the future, and Prof. Devy about being able to carry forward our knowledge of diversity that we so far have had. Nearing the end of the session, the speakers invited queries from the audience. The rich discussion that ensued proved that the session had indeed been a fruitful and thought-provoking one for all present! 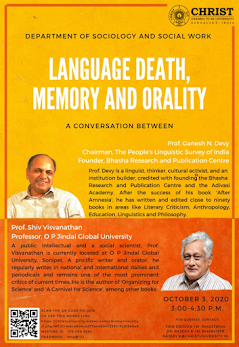 Posted by Department of Sociology and Social Work Student Association at 00:28 No comments: