Queering Media: A talk on LGBTQ+ Representation in Media 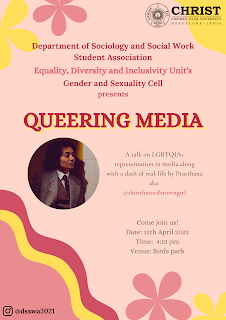 On 12th April 2022, the Gender and Sexuality cell under the EDI unit of the Department of Sociology and Student Work Association organized a talk on “Queering media”, which focused on one main topic: “Representation of LGBT+ in media” and the following sub-topics: “Perception of Sapphic relationships in Indian Media”, “ Impact of positive queer media representation on children and young adults” and “Coming out as a process”. The event was open to all departments, and 66 people were in attendance.

The keynote speaker was Ms Prarthana, Christ alumni and content creator. As mentioned above, her talk focused on the incorrect perception and representation of Sapphic relationships in Indian Media and how that impacts the LGBT+ community. Further, she shed light on the lack of positive queer representation and how Indian films often use queer characters for trauma porn, i.e., using queer characters as bait or as a“further addition” to the plot. She talked about the importance of having positive queer representation in Media and gave examples of “Schitt’s Creek” and “Love, Simon” and how it helps in the coming out process and affirming queer identities. She also discussed the intersectionality of being queer and Indian. She spoke about how the Indian queer community is often met with white stereotypes and prejudices that they cannot relate to, and she stressed the need to have more Indian queer representation. She concluded her talk by strongly emphasizing the need to properly represent queer characters in Indian media and holding Indian Media accountable for false representation and misinformation of the LGBT+ community.

After the talk, the floor was open to the audience to interact, ask questions to the speaker or contribute their viewpoints to the event. Seven people came to the forum to discuss the same. This was followed by a vote of thanks given by one of the emcees who concluded the event.

Posted by Department of Sociology and Social Work Student Association at 04:48