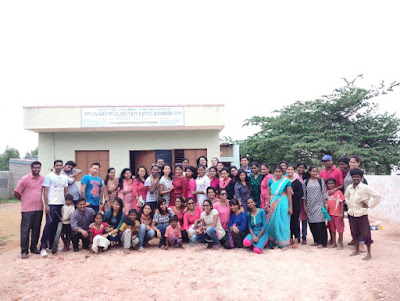 On the 26th of June, 2015, the first year and second year MA Applied Sociology students were taken by the Sociology Department for a village visit to Hoskote. Hoskote is a taluk in Bangalore Rural District. Headquartered at the Hoskote town, it consists of 5 Hoblis - Anugondanahalli, Jadigenahalli, Kasaba, Nandagudi and Sulibele. Agriculture, Apiculture and horticulture are primary occupations of people here, although the industrialization in the recent times in Hoskote and places around has thrown up new opportunities for the people. Hoskote is the largest taluk in Karnataka having 333 villages. 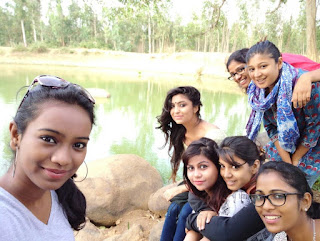 On arriving the same day, we had stayed at the Pragathi Cluster Level Association, funded by The Churches’ Council for Child and Youth Care, Hoskote as a village can now be seen as a semi-developed town. Since this was my second visit to the village, it was still a refreshing experience and I was accustomed to the ways and practices of the village and its people. Given an overview of the developments by Shakuntala mam, the students got an insight into the past, present and future of Hoskote.
After being divided into separate groups, my group had gone to the local school. We had spoken to the school headmaster who was an extremely hospitable gentleman. We learnt that he had been the principal for twenty years out of his own choice. Two classes were held simultaneously in the school, which was a bit difficult to understand. However, the students enjoyed their classes. There were a higher number of girls in the class as compared to boys. Every student was extremely keen on learning and according to the headmaster were “fast learners”. Later on we taught the students about health and nutrition and what vegetables and fruits were important for the proper functioning of the body. 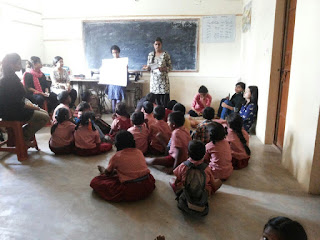 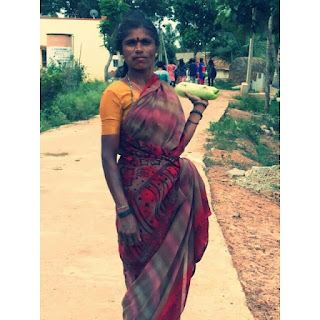 Later on we were introduced to the local tutor by Vinay Sir. He had taken us to the cultivation area, where they grew raggi that they consumed for their own requirements and did not sell it. Mangoes, chillies and mulberry leaves were also grown. By the evening we were taken to the tutorial centre where we had a discussion with the tutor. The number of students who come has dropped in the years. According to me, a proper tutorial centre along with proper lighting and more experienced teachers are required to motivate the children and mainly the parents to send their children to these centres. 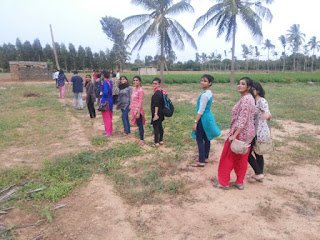 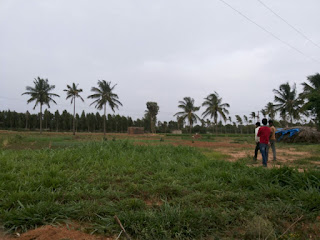 We were also taken to visit an SHG group. These women stayed together and according to them, they would take loans for personal needs such as weddings or for festivals and in two-three months would pay them back. It was great to see how these women were getting their act together and actually going out of their way to do things for their village.

The next day the artists of our department gave back to the community by painting the walls of the school with images of the solar system and so on. It was truly a beautiful gesture. 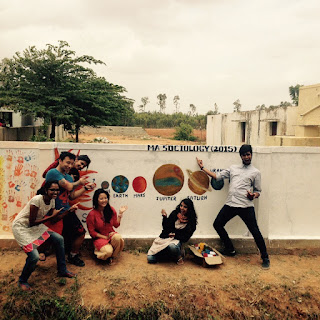 Later on in the reflexive session, we all had certain recommendations. A few were that street lights needed to be put along with proper drinking water and other facilities for the school so as to make the children’s lives better. Another suggestion was that SHG groups should not only use the loans that they get for personal purposes but should make proper use of it so as to benefit the community as a whole such as construction of better roads and buildings, proper drainage systems, etc. Every individual should also learn to be self-reliant and not always depend on outsiders for help. The outside world should be introduced to them and this is possible with proper transportation that needs to be easily available to them. A hospital should also be within reach so that they can access it easily whenever necessary.

Overall it was a great and fun learning experience. The people of Hoskote are very hospitable and treated us with respect and kindness. They were never shy to answer any of the questions that we put forth, maybe because they are used to students visiting them. Hoskote is a promising village and if looked after properly can develop further.

Posted by Department of Sociology at 00:54