On 16th July, 2018 the department of Sociology started its Golden Jubilee lecture series with a talk by Prof. S. V. Srinivas from  Azim Premji University, Bengaluru. A very well reputed scholar in the area of cinema and cultural studies in the south Asian region Prof. Srinivas has published papers and books on cinemas, mass communication and politics in Indian and International academic journals. His interest on research extensively focuses on literature, popular culture and mass politics, Media and Public sphere etc. He has also done considerable amount of work in the areas of film and cultural studies, audience research and cultural politics. In the talk he discussed about inherent  promises in film studies for a sociology scholar. He basically touched upon two distinct but interrelated aspects of south Indian cinema – one, the persisting fanculture in the south Indian film industry, especially Tamil and Telugu cinema, and two, the political economy of cinema in general with specific reference to its 1930s and 1940s time and the consequences of the same. The audience mainly consisted of all the teachers and students from Sociology department and teachers from Social work and other departments in the university. 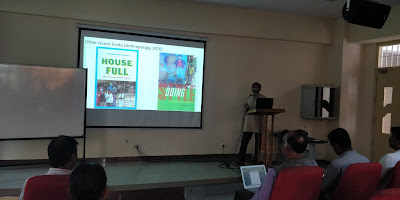 He started the talk by telling the students the relation between media and social sciences and its importance in the contemporary world. The methods that are used by sociologist with regard to media studies through the different modes of analyzing a text were seen problematic by him. He said that sociologists should focus on their own research methods like ethnography, participant observation etc. They should not move into other disciplinary methods like content analysis and textual analysis which is restricted to fields like media studies and communication.
He spoke about film productions and the cinema industry. He said that the people who are the audience analyze and interpret films through different perspectives and they acquire the textual content of the films through different modes/ways. He spoke about the public sphere that is dominated by the capitalists thereby leading to the ideologies of the Bourgeoisie. He spoke of the hegemony and dominance attached towards the content in newspaper articles that favors the haves and is written from the perspective of the haves. Film production looks at how caste comes into play and he gave an example of the Telugu cinema (his area of specialization) which are run by peasants and are connected to land. He speaks of how certain upper caste people dominate media spaces and how it thereby influences films on the same lines. Hence, in Telugu film industry the Reddy’s are shown as the dominant and the film thereby overtly expresses certain caste ideologies that favor the upper caste in that particular region.
Prof. Srinivas said that film is loss making industry and said that Indian Cinema lost a lot of money over the past few decades. 80% of films have serious issues in earning the money that they have invested and the production houses in such cases face a huge loss if the film is not able to reach its audience. The cinema is also seen as a platform for the new elite where the bourgeoisie controls the media. He also spoke of archives that media houses maintain with regard to distributors, actors, laborers etc. He also spoke of the role of research in these platforms where he focused on “gendering of creative labor”. Cinema’s attitude towards women were clearly discussed as to how they are viewed as objects for the male gaze and how women from certain low caste/ race backgrounds are given roles according to their  identity. The representation of women in media is of serious discussions among the researchers. He then spoke of changes in film studies. He gave examples of books like House full- Indian Cinema and the Active Audience, written by Lakshmi Srinivas. He spoke of how the audience perceive the world, how they think and how attitudes are shaped through the films they watch. 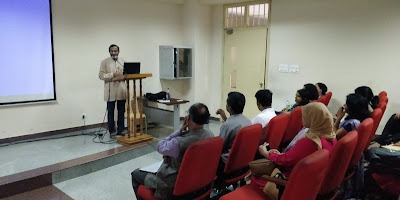 He then focused on talking about Hero Worship and how the audiences behave in theatres. He screened few films from the Telugu and Tamil film Industries where for instance, the movie Vedhalam depicts actor Ajith (hero) showing a pistol to the villain and the audience jump in joy and scream out with happiness and when Ajith shoots him the audience are happy about the death of the villain and how the audience also embrace Ajith. He spoke of audience responses and their different emotional transformations while watching a film and observing a text. Then he speaks of hero worship in relation to religion where actors are seen as Gods and how the audiences worship them. He speaks of how media influences people and their mindset and the way they interpret the content in the films that they watch. Media also promotes a lot of violence yet he says that people will use their minds, interpret the content and act according to the norms of the society. He also speaks of how women depict the image of Goddesses (which he calls as horror) to kill the villain and the response of the audience.  He ends his talk by saying how theo -visuality transforms film consumers to devotional people through Hero worship.  Dr.Victor Paul, HOD, Department of Sociology and Social Work expressed vote of thanks to Mr.S.V. Srinivas and all partcipants.