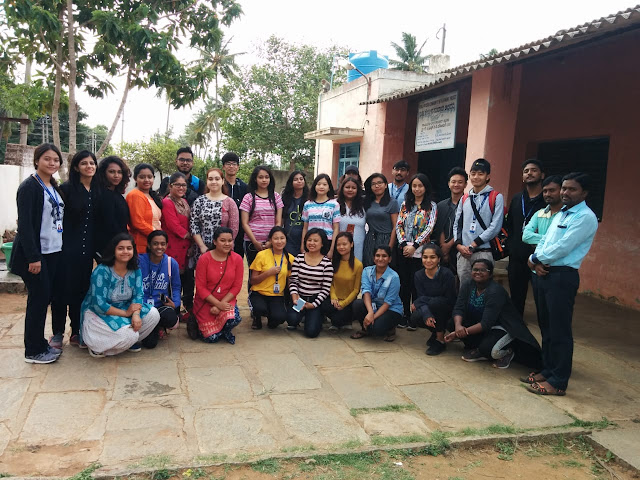 As part of their course, MA Applied Sociology students were taken for a field trip to Kolar on 20th and 21st July, 2018. The trip was organized by the department of Sociology and Social Work in collaboration with the Centre for Social Action (CSA) at CHRIST (deemed to be University). The intention behind organizing the trip was to provide the students with a firsthand experience of village life. Most of the students took part in the programme which resulted in great levels of interaction between the students and the villagers on the one hand and the students and the CSA activists working in the village.
Dr. Rajeev Kumaramkandath and Dr. Sudipta Garai from the department of Sociology accompanied the students. The prime initiative for the programme came from the head of the department Dr. Victor Paul who consistently pushed the idea from the beginning of this academic year. The accommodation for the group was arranged at the CSA camp office at Srinivasapura taluk in Kolar district and the team visited two villages during the trip. One group visited the Kondenahalli village and the other visited Bollepalli; both villages were located remotely at about a distance of 15-20 kilometers from the CSA office, which in itself was distant from the main highways that connected with the cities.
The students were given a detailed orientation to the activities of CSA by the officers present there that included Mr. Anjan and Mr. Nagaraja. During the village visit the teams had very elaborate interactions with the villagers – both men and women as well as their children – and the activists who worked in the villages. The primary activity of CSA was through the Self Help Groups that it had established around 10 years back and through which it consistently worked towards the welfare of the whole village and particularly for the empowerment of the women. CSA also has serious investments in the children’s welfare and special programmes for the education in general and for girls in particular.
The trip was one space that our students literally watched with all excitement. They all felt equally enriched both intellectually and emotionally as village life has its own promises, problems as well as challenges.
The group spent the night at the CSA office and started their journey back the next day early morning. Below after this report is a narrative from our students about the trip.
Dr. Rajeev Kumaramkandath 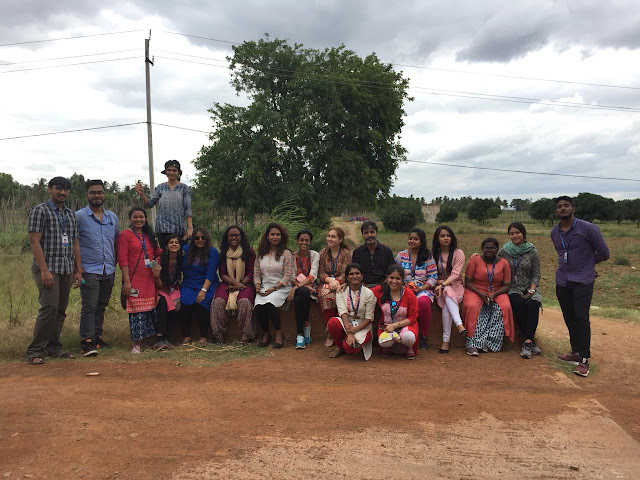 Students' Perspective
We, the Students of 1st and 2nd year Masters in Applied Sociology, CHRIST (Deemed to be University) went on an overnight trip to the Centre for Social Action office at Srinivasapura Taluk in Kolar in Karnataka on 20 August 2018. We started our Journey from Christ University at 8:00 AM and reached Kolar at around 12:00 PM. We were accompanied by two of our professors, Mr Rajeev Kumaramkandath and Ms Sudipta Garai. In Kolar our accommodation was arranged in 2 Rural Camps. It was a serene and beautiful area with vast landscapes and long tracts of arable land. On our arrival at the CSA office, the office staff gave us a warm welcome and after getting fresh we were served lunch. The lunch was a different experience for us all as it was so simple and delicious. The whole group took a stroll through the vast and beautiful landscapes to observe the surroundings and to make sense of the place. We found that the villagers are so hardworking that in a district like Kolar, which is one of the driest places in the state, one could see vegetables and fruits (primarily Mango) being actively cultivated. Tomato, Mango and different kinds of gourds were being grown with an intention of distributing in the local market. The village was, nevertheless, in an economically unsound condition and with not less amount of infrastructure.

The village was famous for mangoes. As we walked through the village the we could see how those hardworking people have grown different varieties of vegetables and fruits in their lands. Farming was done so scientifically at the same time as following some of the traditional methods. There was paddy and maize as well in some disparate sections that remained remote from we were. The houses in the immediate vicinity were more pakka and more or less well built with concrete and some with flat terraces. As we walked we were also discussing about the socio-economic sides of village agriculture and changing cultures. One of the officers from CSA came to us and said we have to return as the activities are about to begin.
Once in CSA office, the officers there started the orientation programme. It started with some ice breaking sessions which was very interesting and all students took part with so much of excitement. During the orientation a caretaker of the local anganwadi pointed out the benefits of the self help groups initiated by CSA among the villagers. She discussed how some women started bank accounts and operated those accounts on their own. They were trained to use these accounts for emergency and personal uses. Women in Self Help Groups were provided with trainings in activities like weaving, knitting and other related tasks. During the orientation we were told about the experiences of the CSA activists in the village ever since they started operating in the place 10 years back. The village so remotely located and distinct from the reach of state interventions was in a very poor state. However CSA’s interventions could make a big difference in the not only the women’s and children’s lives in the village but also in bringing the government’s attention to this place. This is one important factor why the village is decently connected to the nearby cities and has an average level of infrastructure.
However this was not the case in several other places in Kolar. This we realized as went to field trips to the remote villages where CSA was actively engaging with the villagers.  In the afternoon, post orientation, we were split into two groups and were taken to two different villages to see and understand the village life in its entirety including their forms of occupation, dynamics of collectivities, problems with economy and infrastructure etc. Each group was guided by a CSA member. We also made sure that the Kannada speaking members in our groups were equally divided so that we have sufficient translators. The first group went to Bollepalli village which was mostly populated by the Hindus. As we explored the village we had some serious interactions with the villagers. The CSA officer gathered the children in the village in the nearby village where we conducted some activities for their infotainment.  We visited some houses and interacted with the family members.

The second group went to Kondenahalli village which was primarily a Muslim area. There was some serious interactions with the people who were part of the Self Help Groups. Some of the people we interviewed pointed out that there were total 18 members in Self Help Groups. The duty of these Self Help Groups was to pool money and sanction loans. The wage labourers in the village worked on an average from 9:00 am till 5:30 pm. They were paid a very less amount of salary (300 Rs). A sharp distinction between the upper and the lower castes was visible in both these villages. The Head of the panchayat was also the member of an upper caste. We also interviewed somemembers of these Self Help Groups. One Woman member who have been associating with the group for the last 10 years told that being part of the SHG she now feels far empowered while dealing with big landlords and other male folk in the village. The SHGs also help its members to generate loans for agricultural purposes .The woman and her family had 5-6 acres of Land. Hers was a large family consisting of 18 members. of these 6 were landlords and the others worked as daily wage labourers. The SHG would conduct meetings twice in a month in order to decide whom should be given the loans and how to repay the loans.
We found in another family that we interacted in Kondenahally, that there were 3 members who were leaders of the Sangh, that is the SHG; this included the President, Treasurer and Secretary. This family sells Mangoes at around 20 Rs per Kg which was very less comparing to the prices that mangoes fetch in the nearby cities. They said that sometimes farmers had to sell mangoes for as cheap a price as less than Rs 5 per kilo. We also interviewed another person who was a lecturer in P.U College (Girls College) and was also doing his P. H. D from Bangalore University.

This one day field visit was a new experience for the students as we all live in urban areas where we are given all the facilities but this is another reality of India that we have never experienced. The Department of Sociology and Social Work (CHRIST - DEEMED TO BE UNIVERSITY) along with Centre of Social Action had given the students an opportunity to spend one day in Rural area and analyze the problems that they had to face everyday. Though there was no proper electricity, but they were very happy with their life. One very important thing the trip has done for us as students of sociology was that it allowed us to witness firsthand what the dynamics – internal and external – of village life is. The challenges they faced – including questions of education, economy and inter caste and inter religious relations, the possibilities of community life etc., - and the opportunities they presented in understanding a different form of communal existence was very immense.
Both the PG classes of Sociology would like to thank Dr. Victor Paul (Head of the department of sociology and social work) and also the organizing committee for organizing this rural trip that had enhanced our learning skills. It was a very good experience at looking at the true face of rural India while living within it.
Posted by Sudhansubala.Sahu at 22:02