The Environmental Justice Cell of the Equality, Diversity and Inclusivity (EDI) Unit, under the Department of Sociology and Social Work Student Association, had conducted its first offline event, a Guest Lecture on the topic of “Lake Restoration”. The session commenced with Dr Victor Paul welcoming the esteemed guest, Mrs Mithan Subbiah, the Hulimavu Kere Tharanga core team volunteer. The NGO is rounded for the protection and restoration of the lake ecosystem of the Hulimave lake, dated 300 years old. As the talk progressed, Ms Mithan shared the geographical parameters and the historical evidence of the lake with the attendees. She shared the inception of the team of driven individuals and how the responsibility was taken into their hands in reminiscence.

The team adopted a cohesive approach to ensure that the lake never remains unchecked. This included sessions of enquiries and interaction with the fisherman, the corporates and the local members living close to the lake. The selfless actions of the members of the Hulimavu Kere Tharanga showed how determined individuals, regardless of their social and economic background, can muster up the courage to deal with the challenges together. The unit worked in caution as they were often questioned for their motives by the officials, but this was tackled with their apparent resolve and commitment to the project, which led to the inquirers’ giving in. 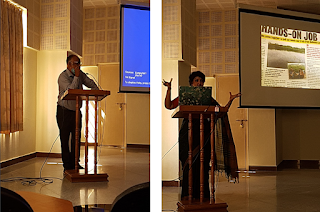 Ms Mithan gave an overview of their schedule during work. The diversity of the team and the activities through which they gather were shared fondly by the speaker. The NGO had covered it all, ranging from children having their birthday tree-planting sessions to companies holding CSR-related activities. As a unit, they grew exponentially with the actions they had taken charge, including the transformation of a barren road in 2017 to a greener landscape in 3 years. Furthermore, the team's efforts were not left unnoticed by the rest of the world. The NGO had amassed media coverage to clear the submerged POP (Plaster of Paris) idols in the Hulimavu lake. They were able to achieve the goal of bringing down the idol submersions by 90%. In summary, the session provided an exclusive insight into a different hue of social work to the attendees. In a reward-centric age of social responsibility, Ms Mithan provided a new meaning to the feeling of being rewarded.

The session attracted an enthusiastic audience, and some of them were volunteers of other Lake Restoration projects in and around the city of Bengaluru. Ms Mithan's lecture gave necessary insights into community involvement, intake ownership and care of a public resource such as a lake.

Ms Adrija Dutta od 3MSW HRDM brought the session to an end with a vote of thanks.

Posted by Department of Sociology and Social Work Student Association at 02:01