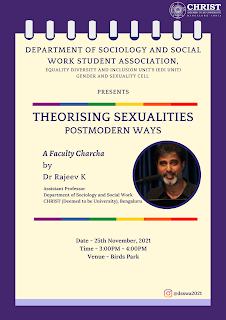 Dr Rajeev started the Charcha by acknowledging how conventional educational institutions did not provide many avenues for publicly discussing Sexuality as a topic until very recently. Dr Rajeev went on to talk about how in the 18th and the 19th centuries when societies were slowly becoming modern or at least entering the process, Gender and Sexuality remained an area of great concern. Through these aspects, the ruling sector of the society wanted to control and civilise the ordinary people to regulate them.

In India, the British wanted to control the sexualities of Indians with the same motive. Hence they criminalised homosexuality in the year 1861 (section 377). He further added how Indians internalised this notion, and in this process, heterosexuality (and monogamy) was made the norm as it facilitated the working of the larger socio-political system.

According to Dr Rajeev, postmodern theories made a difference by deconstructing the term “Sexuality”, which no longer has biological connotations; it is not limited just to sex and desire but is also an instrument of discipline people organising sexual relations. The pre-modern societies, Dr Rajeev added, didn’t stigmatise alternate sexualities such as homosexuality the way modern societies did, and the evidence of this claim can be found in the mythologies. According to him, modern societies had proposed various categories for people to fit into, which further suppressed alternate sexualities under a box and made them vulnerable to attack or resistance. Postmodernity deconstructed the binaries of masculine/feminine, and male/female, which helped bring about a spectrum of sexualities.

Dr Rajeev concluded the discussion by acknowledging the LGBTQ+ community’s efforts toward challenging the concept of heterosexuality as a norm and thereby challenging the larger power structures of society. The session was followed by a short Q&A where the audience willingly asked questions and presented their perspectives on the topic of Sexuality. It was an overall healthy and insightful discussion.

The charcha had the following outcomes:

Posted by Department of Sociology and Social Work Student Association at 02:04